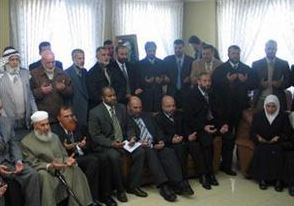 Palestinian sources in Ramallah reported, Monday, that officials of the South African Embassy in the city held a meeting with elected Hamas members of parliament to discuss the current situation in Palestine and the ongoing Israeli violations against elected officials. The meeting comes while elected legislators in Jerusalem continued their sit-in protest at the Red Cross in occupied East Jerusalem to protest Israel’s decision to remove them from the city.

Legislator Mohammad Abu Teir, who was recently abducted by the army and was exiled from his native city, Jerusalem, told embassy officials that Israel is ethically cleansing the Palestinians from Jerusalem, Jaffa (Yaffa) Akka (Acre), and that these violations started more than 40 years ago.

Legislator Ayman Daraghma, urged the government in South Africa to raise the issue at the United Nations Security Council.

Embassy official, Michael Van Nikrik, said that the embassy is gathering all needed data in order to present it to the Foreign Ministry in an attempt to find a way to provide help through diplomatic means.

This is not the first time the issue is raised at the embassy of South Africa as elected Hamas officials have been discussing it with South African members of parliament.