Seven Palestinians Killed By Army Fire In Gaza In January 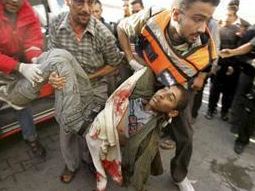 The Higher Committee for Emergency Services in the Gaza Strip reported that seven Palestinians were killed by during Israeli military attacks against the coastal region in January. At least twenty residents were wounded.Most of the casualties took place during Israeli air strikes and bombardment targeting the Gaza Strip.

Committee spokesperson, Adham Abu Salmiyya, told the Quds Press that two were killed on January fifth after the Israeli Air Force bombarded northern Gaza. The two were not identified in the statement.

Another resident, identified as Mohammad Jamil al-Najjar, 21 years old, was killed by a missile fired by the Israeli Air Force targeting him while riding his motorcycle.

Resident Amjad al-Zaanin, 18, from Beit Hanoun in northern Gaza, was killed when the army fired artillery shells into the area.

Soldiers also shot and killed Shaker Qarmout, 56, also from Beit Hanoun while working on his land.

Furthermore, The International Solidarity Institution For Human Rights issued a report revealing that Israeli soldiers shot and killed 15 Palestinians, including three children, and abducted more than 200 others during the month of January in the West Bank and the Gaza Strip.

The institution said that seven of the slain residents are from the West Bank and the rest are from the Gaza Strip.

It added that the army conducted dozens of arrests in January and abducted more than 200 residents, including 55 children, in addition to more than 200 workers who were arrested under the claim of entering Israel to work without a permit.

Dozens of arrests were made on a number of roadblocks across the West Bank, while several residents were abducted on crossings and roadblocks.