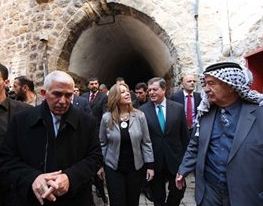 During her visit to the Ibrahimi Mosque, in the southern West Bank city of Hebron, also referred to as the Cave of the Patriarchs, extremist settler leader, Itamar Ben Gavir, shouted at Spanish Foreign Minister, Trinidad Jimenez, describing her as an anti-Semite and as “Israel hater”.Jimenez was touring the city along with Hebron governor, Kamil Hamid, who was escorting her in the Old City of occupied Hebron.

The attack took place while Trinidad was leaving the Ibrahimi Mosque as Ben Gavir and a number of fundamentalist settlers gathered to protest her visit.

Hamid told the Maan News Agency the settlers also shouted at Jimenez “ordering” her to go back to Spain.

He also stated that the settlers were protected by Israeli policemen who refrained from interfering.

Hamid described the attack as an act of shame and a violation against the representative of a country that is actively involved in the peace process.

Responding to the anti-Semite slurs directed at her, Jimenez said that she does not hate anybody, and that he came to the region to promote the peace process, and to observe the humanitarian crisis in the city.

The extremist settler, Ben Gavir , was responsible for a January attack against a home in Tal Romeida neighborhood in Hebron while the governor was visiting it after a previous attack carried out by extremist settlers.