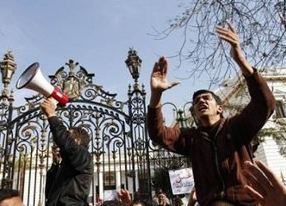 At the eighteenth day of massive protests demanding the removal of Egyptian President, Hosni Mubarak, and his regime, the Egyptian army was extensively redeployed in several streets in Cairo, especially those leading to the Presidential palace.The army was deployed in Nasr and Masr Al Jadeeda where the palace is located, and sealed off several other roads.

The army is aiming mainly at protecting the palace, Intelligence headquarters, and the building of Egypt’s official government-run TV station.

Local sources reported that the Curfew in Cairo was escalated while the army
tightened its siege in Cairo and installed dozens of roadblocks to be added to the ones that were installed after the protests started.

Yet, Egyptian military sources said that the army will not prevent the residents from reaching the Tahrir Square in Cairo, the center point of the protests.

Meanwhile, the Youth Revolutionary Coalition denounced the statements of Egypt’s Vice President, Omar Suleiman, in which he stated that the alternative of dialogue is a coup.

The coalition said that such statements are a serious threat to the revolution, and confirmed their determination to continue their protests until the regime of Mubarak is ousted.

Ahmad Maher, coordinator of the April 6 Movement, stated that Suleiman is a man who runs secret intelligence services, and that he is wasting time in order to ensure the current government and its head remain in power.

Maher added that Suleiman’s call for dialogue with the revolting Egyptians is only a manipulation, and that after his called were rejected, Suleiman started holding talks “with fake parties and unknown persons”.

He further stated that the Egyptians will not leave the Tahrir Square and all other squares where protests are being held, adding that “the threats of Suleiman and others will not intimidate the revolution”.