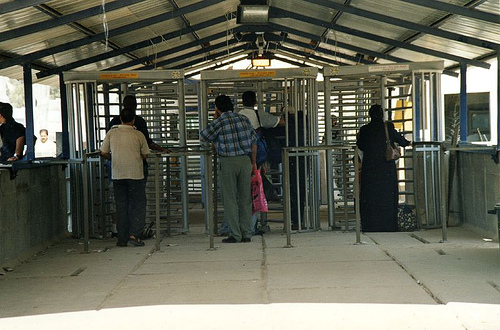 Over the weekend, Israeli troops erected new earth mounds blocking the Nablus-Beit Iba road, a road which had been closed by Israeli authorities until international intervention by the Quartet for Mideast Peace, protests and lawsuits led to its opening in 2010. Also this weekend, Israeli military officials told the Tel Aviv-based news site Ynet that there were no plans to dismantle the West Bank’s two largest internal checkpoints, Huwwara and Beit Furik.The governor of the Nablus area, Jebrin al-Bakri, told reporters that he had been told by Israeli authorities that the two checkpoints would be dismantled. But this was denied by Israeli officials, who said both checkpoints would remain in place for the indefinite future. Both checkpoints had been closed to travel until 2009, choking a major artery from the central West Bank to the north.

Israeli authorities have erected 630 checkpoints and roadblocks throughout the West Bank, which have prevented the freedom of movement of Palestinians between different villages and towns – most cars do not have permits to cross checkpoints, and Palestinians are thus essentially imprisoned in small areas a few miles wide.

In addition to maintaining the Huwwara and Beit Furik checkpoints, Israeli authorities also put earth mounds back in place on the road between Nablus and Beit Iba, blocking passage to an apartment complex consisting of 200 units constructed to house Palestinian teachers who work in the northern West Bank.