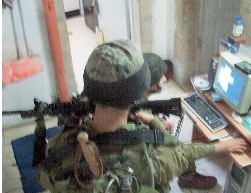 Israeli soldiers abducts, on Monday at dawn, two Palestinians from the southern West Bank city of Hebron.The two were taken from their homes after the army conducted an invasion into the city, broke into and searched several homes.

An Israeli army spokesperson confirmed the arrests and claimed that the two are ‘wanted’ and added that the two residents were moved to interrogation centers.

In related news, Israeli soldiers handed a number of residents military orders to demolish their homes in Beit Hanina, Wadi al-Dam, al-Marwaha, and Shufat in Jerusalem, and the al-Ramadeen area in the southern West Bank city of Hebron.

The Israeli Authorities claim that the homes were constructed without official construction permits.

The families said that they filed official documents to the Israeli Authorities, and that their applications were constantly delayed.

Soldiers also broke into sixteen homes, a mosque and a school, south of al-Thahiriyya in East Jerusalem, and handed orders for the demolishing of several homes.

The Jerusalem Municipality set strict conditions on the licensing of Palestinian constructions in occupied East Jerusalem while licensing cost mounts on average to nearly 100,000 Israeli Shekels (approximately US$ 28,000), an issue that forces the residents to build their homes without permits to order to accommodate their natural growth.

On Sunday, three Palestinian medics were wounded by army fire while trying to provide first aid to residents who were wounded during clashed with Israeli soldiers in Silwan, in East Jerusalem.