Settlers Burn A Mosque Near Nablus 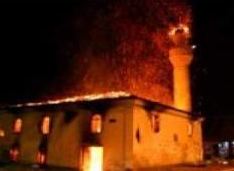 A group of extremist Israeli settlers broke, on Monday at dawn, into a mosque in Qasra village, near the northern West Bank city of Nablus, and torched it after destroying its property and writing anti-Arab slogans on its walls. The Maan News Agency reported that the settler broke into Al Nourein mosque after breaking it windows, and burnt tires inside the mosque. The fire spread in the mosque consuming most of its property.

Ghassan Douglas, in charge of the settlements file at the Palestinian Authority in the northern part of the West Bank, stated that this is not the first attack against mosques in the West Bank, and called on the Quartet Committee (The United States, The European Union, the United Nations and Russia) to intervene and stop the escalating attacks.

In related news, dozens of settlers hurled stones at Palestinian vehicles driving near the Yitzhar settlement, on the Nablus- Huwwara road; damage to several vehicles and a local bus was reported.

The settlers are carrying ongoing attacks against the Palestinians under the so-called “Price Tag”, as they blame the Palestinians for any Israeli evacuation of illegal settlement outposts.

On Monday at dawn, Israeli soldiers demolished three structures at the Migron illegal outpost, near the central West Bank city of Ramallah.

Earlier in June this year, settlers of the Alei Ayin illegal outpost torched a mosque in Al-Mughayyir village, near the central West Bank city of Ramallah, after burning tires and throwing them in the mosque causing serious damages.