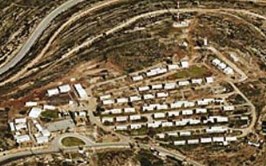 Israeli sources reported that hundreds of policemen and members of the so-called Civil Administration Office, running under the Israeli army, demolished on Monday at dawn, three structures in the illegal Migron settlement outpost, near the central West Bank city of Ramallah.The sources added that dozens of settlers clashed with the soldiers and the policemen, and that four settlers and policemen were injured. The police also apprehended six settlers pending further interrogation.

It is worth mentioning that the Israeli Supreme Court ordered the full evacuation and demolition of the Migron illegal outpost, and gave the settlers until March 2012 to fully evacuate it.

Israeli Peace Now movement filed an appeal demanding the court to demolish the three structures in question, and the appeal was accepted by the court. Other structures inhibited by the settlers are still intact.

Danni Dayan, head of the so-called Yesha Settlements Council, stated that the demolition is considered “a shameful act that strains the Israeli government that rushed to demolish the buildings without a decisive order in this regard from the court”, according to Dayan.

Under Israeli law, several settlement outposts, built on Palestinian lands in the West Bank, are illegal, while demolish orders were issued against some of them.

Under International Law and the Fourth Geneva Convention, all Israeli settlements
in the occupied territories are illegal; even those Israeli considers “cities” and “neighborhoods”.