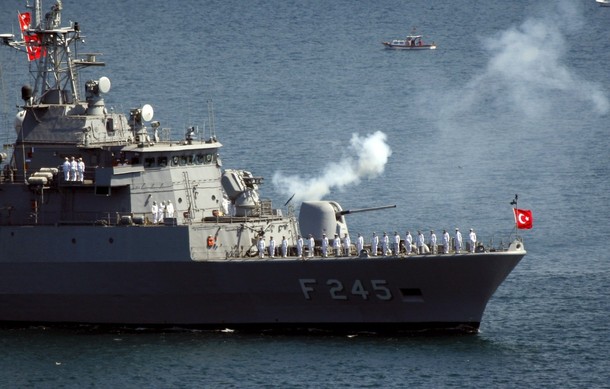 According to a report by Turkish media agency Hurriyet, Turkish officials have pledged to accompany any future civilian aid missions to Gaza, saying, ‘ The eastern Mediterranean will no longer be a place where Israeli naval forces can freely exercise their bullying practices against civilian vessels’.The announcement came just after the release of the Palmer Report of the United Nations, which both condemns the excessive use of force by Israeli forces in an attack on a Turkish aid ship in 2010, in which Israeli troops killed nine aid workers, and justifies the Israeli siege on the Gaza Strip. The Palmer Report says that the Israeli siege of Gaza is lawful, a claim that has been challenged by international law experts, including the Center for Constitutional Rights.

Turkish President Recep Erdogan was reportedly angered by the report, which he felt downplayed the Israeli aggressive action in international waters, which would normally be considered an act of piracy.

Erdogan also announced that he plans to visit the Gaza Strip in the near future, adding, ‘Our primary purpose is to draw the world’s attention to what is going on in Gaza and to push the international community to end the unfair embargo imposed by Israel.’

According to Sunday’s report, the Turkish navy will increase its presence in the eastern Mediterranean Sea to counter Israeli naval forces stationed in international waters to enforce the naval blockade preventing any goods or passengers from entering the Israeli-occupied Gaza Strip.