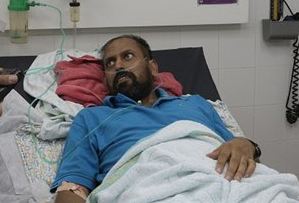 Israeli Border Authorities at the Allenby Bridge, leading to Jordan, prevented on Sunday a seriously ill West Bank patient, a former political prisoner, from traveling to Jordan for urgently needed medical treatment.The Maan News Agency reported that the patient, Zakariyya Daoud Issa, 43, suffers from an advanced stage of cancer, and that his health condition is sharply deteriorating.

He received all needed permits and referrals to cross the bridge by ambulance to head to the Hussein Medical Center in Jordan.

Palestinian Minister of Detainees, Issa Qaraqe’, stated Issa did not receive the medial attention he needed while in detention, an issue that caused the serious deterioration in his health condition, “and now Israel is preventing him from receiving the urgently needed medical treatment in Jordan”.

Qaraqe’ added that the ministry will follow the issue with all related institutions and human rights groups.

Zakariyya, a father of four, from Al Khader village near Bethlehem, was sentenced by an Israeli military military court to 15.5 years imprisonment; he spent nine years in prison and was released due to his serious medical condition.