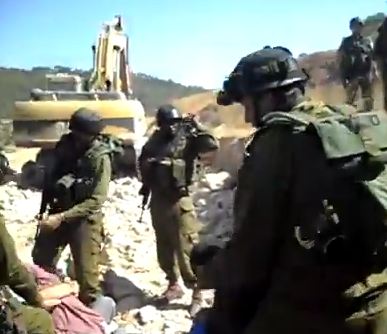 Local sources reported Monday that Israeli soldiers are currently surrounding the Al Walaja Village, near Bethlehem, and are uprooting dozens of Olive trees in order to construct a section of the illegal Annexation Wall in the area.The soldiers, heavily deployed in the area, declared the village a “closed military zone”, and are preventing anybody from entering or leaving it.

Recently, the Israeli High Court authorized the army to resume the construction of the Wall on village lands in Al Walaja under the pretext that “the damage causing by the construction is relatively acceptable comparing to its security benefits”, according to the court.

Adel Al Atrash, deputy head of the Al Walaja Village Council, stated that the army uprooted, so far, more than 50 trees in the area.

Meanwhile the European Union stated that it is concerned about the serious humanitarian implications the Wall is having on the residents of Al Walaja.

On Monday at noon, settlers of the Beitar Illit illegal settlement, south west of Bethlehem, flooded with sewage water Palestinian olive orchards that belong to residents of Nahhalin village, near Bethlehem.

Osama Shakarna, head of the Nahhalin Village Council, stated that the settlers flooded more than 40 Dunams planted with more than 2500 Olive.

The sewage water reached Ein Fares natural spring used by the shepherd as the source of water for their herds.