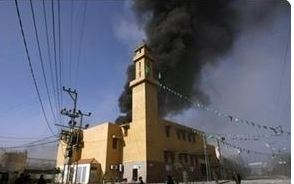 The Palestinian Authority in the West Bank denounced the Israeli military escalation and settlement construction, describing the Israeli violations as an attempt to foil the Palestinian initiative to seek international recognition and full membership at the United Nations this month.Nabil Abu Rodeina, spokesperson of the Palestinian Presidency, stated that Israel is escalating its assaults to pressure the P.A into withdrawing its UN initiative.

Talking to the Palestine News and Info Agency, WAFA, Abu Rodeina slammed the escalation and the construction of Jewish settlements in the occupied West Bank and in occupied East Jerusalem.

He also denounced the Monday at dawn attack that was carried out by extremist
settlers who broke into, burnt and desecrated the Al Nourein mosque, in Qusra village, near the northern West Bank city of Nablus.

Abu Rodeina further slammed the expansion of the illegal settlements of Ramat Shlomo and Rakhus Shu’fat settlements, and the construction of the new settlement in place of the demolished Shepherds Hotel, in occupied East Jerusalem.

The Palestinian official voiced an appeal to the international community to intervene, and practice pressure on Israel in order to stop its violations to the International Law, and the Fourth Geneva Conventions.

Fayyad added that this escalation proves that Israel disrespects the international
law, and that the Israeli government is responsible for the violations that are regularity carried out by the settlers against the Palestinians.

The Hamas-led government in Gaza also denounced the torching of the mosque and the escalating attacks.

Salah Bardaweel of Hamas stated that these attacks are part of a systematic Israeli racist policy against the residents, their lands and their holy sites.

He added that Israel still carries the same racist mentality that existed in South Africa during the apartheid regime.