New Palestinian Strategy To Avoid U.S. Veto At The UN 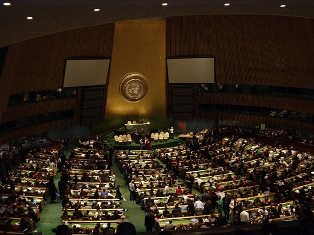 Fatah’s leadership is re-wording the proposal for a Palestinian State to submit to the United Nations this month. The new version is designed so that the countries that are more reluctant to accept a Palestinian state will more likely support Palestine’s bid for recognition, or at least abstain from voting.Instead of posing the recognition of Palestine within the 1967 borders, the new draft asks for a state with permanent borders to be determined in later negotiations with Israel. The new borders would be based on the borders of 1967, but with more flexibility than the original draft proposed.

This approach will make it harder for the United States, and even for Israel, to vote against the proposal without damaging their external image. It will also make it possible for Hamas, the second largest political faction in Palestine, to join in on the call for independence.

For the time being, they have refused to take part on it alleging that the recognition of the 1967 borders before the signing of a final-status agreement means giving up the Right of Return.

European Union declared last August that its position will be decided in Poland’s summit next weekend, will depend on the content of the proposal.

According to Trinidad Jimenez, Spain’s Minister of Foreign Affairs, the proposal must include three requisites to be supported: the recognition of the two states, safety guarantees for Israel and willingness to revive negotiations. “In order to vote for the document, it will have to satisfy these three conditions,” she said.

The new wording of the document has been drafted in recent days by the Fateh leadership, following the advice of a specialized team of Palestinian researchers, advisers and members of the Palestine Strategy Group.