Abbas: “We Are Committed To Serious Talks” 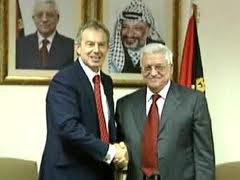 Palestinian President, Mahmoud Abbas, stated on Tuesday at night that the Palestinian leadership is committed to peace negotiations with Israel, but the Israeli stances and its rejection to abide by the signed peace deals, pushes the Palestinians to head to the United Nations.The statements of Abbas came during his meeting in Ramallah with the Quartet envoy to the Middle East peace process, Tony Blair. (Quartet Committee; The United Nations, The United States, The European Union and Russia).

Abbas said that the Palestinians are ready to resume the stalled peace talks as long as Israel stops all of its violations, and proves its commitment to the foundations of the peace process.

The Palestinian President further stated that the peace process is based on the two-state solution that ensures the establishment of an independent Palestinian state in the Palestinian Territories occupied by Israel in 1967, with East Jerusalem as its capital, and halting all Israeli settlement activities.

Abbas also stated that heading to the United Nations to seek full membership, and an international recognition of the Palestinian State, is a legitimate right that does not contradict with the peace process.

During a meeting with the National Security Council Principals Committee in the United States, Robert Gates, former U.S. Secretary of Defense, strongly criticized Israeli Prime Minister, Benjamin Netanyahu, for his polices adding that the policies of Netanyahu indicate that he is not grateful to the U.S., and is isolating Tel Aviv on the international level.

Washington and Tel Aviv are leading a campaign against the Palestinian-UN bid, while the White House stated that the resumption of peace talks is the only means to reach a peace agreement.

But Israel wants to hold talks on one hand, and construct and expand Jewish settlements in the occupied territories, including East Jerusalem, on the other. It is also ongoing with its invasions and violations in the occupied territories, and refuses to hold talks on fundamental issues such as Jerusalem, natural resources, borders and the Palestinian refugees.