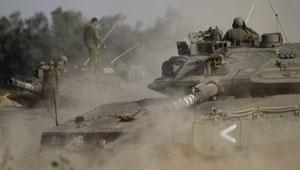 One resident was killed and four others were injured on Tuesday evening, when the army bombarded an area east of Al Qarara, in Khan Younis, in the southern part of the Gaza Strip, The Palestine News and Info Agency, WAFA, reported.The slain resident was identified as Khaled Abu Samhoud, 22; his body and the four wounded residents were moved to Nasser Hospital in Khan Younis.

Border areas between Gaza and Israel are subject to frequent Israeli invasion and attacks, including uprooting Palestinian farmlands close to the border.

Israel is enforcing a no-man zone on areas that are close to the border, an issue that prevents the famers from entering their lands, and those who do are subject to direct gunfire from the area; dozens of casualties were reported due to the illegal Israeli measure.