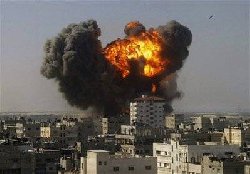 The Israeli Air Force fired on Wednesday at night a missile targeting a group of fighters east of Jabalia, in the southern part of the Gaza Strip; damage was reported, no injuries.Local sources reported that the fighters were close to a launching pad used for firing homemade shells into the Negev, and that the launching pad was destroyed in the blast.

On Wednesday evening, Israeli sources reported that one shell was fired from Gaza into the Negev; no damages or injuries were reported.

The firing of the shell came after the Israeli Air Force assassinated a fighter of the Al Quds Brigades, the armed wing of the Islamic Jihad, in Dir Al Balah, in central Gaza.

On Tuesday evening, the army bombarded Al Qarara town, east of Khan Younis, in the southern part of the Gaza Strip, four residents were injured. The slain fighter was identified as Khaled Abu Samhoud, 22.