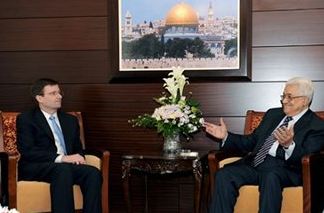 U.S. Envoy, David Hale, has officially demanded on Wednesday, Palestinian President, Mahmoud Abbas, to void the plan to head to the United Nations to seek international recognition of statehood, and told him that Washington opposes the move.Abbas met Hale at the presidential headquarters in the central West Bank city of Ramallah; U.S official Dennis Ross, and U.S. Ambassador in Tel Aviv, Daniel Shapiro attended the meeting.

Palestinian negotiator, Dr. Saeb Erekat, stated that Hale clearly informed Abbas that the United States strongly believes that resuming direct peace talks between Israel and the Palestinians is the only option, and that Tony Blaire of the Quartet Committee is preparing an initiative for resuming peace talks based on the establishment of a Palestinian State in the 1967 border.

Erekat added that, despite the U.S stance delivered by Hale, the U.S envoy “did not deliver a direct threat from the U.S.”.

The Palestinian official further stated that Abbas’s response to Hale was “any person or country that supports the two-state solution, should support the Palestinian- UN move, as heading to the United Nations does not contradict the efforts to resume peace talks”.

Abbas also said that Israel must clearly recognize an independent Palestinian State in the 1967 borders, with East Jerusalem as its capital.

In related news, U.S. Secretary of State, Hilary Clinton, urged Abbas “to listen to the U.S. message”, in order to avoid what she called “a negative scenario by the end of this month”, referring to when the Palestinian Authority will be filing its bid at the United Nations.

U.S Foreign Secretary spokesperson, Victoria Noland, stated in a press release that Clinton phoned Abbas and urged him to listen to what Hale has to offer.