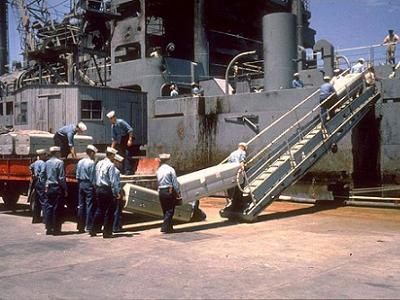 GAZA: A retired college professor from the US state of Texas who has sailed approximately 8,000 miles to the eastern Mediterranean in an epic voyage, is heading toward his destination — the exact location where Israeli forces tried to sink a US Navy ship in 1967, killing or injuring over 200 American servicemen.Larry Toenjes, 74 years old, will remain 12 miles off the coast of Gaza in international waters, where the attack took place.

He is planning to hold a memorial service for those killed on board the ship, the USS Liberty, on Thursday.

Toenjes, who departed from Galveston, Texas, almost four months ago, in a 39-foot sailboat, is accompanied by Marine veteran Rusty Glenn, a veteran who joined him in Malta.

While there has been concern that Israel might interfere with their voyage as it has other boats in the Mediterranean, ramming and hijacking some, so far Israel seems to be ignoring the voyage.

Israel shelled and torpedoed the ship, an electronics surveillance ship, in an attack that lasted as long as the attack on Pearl Harbor.

While Israel and its partisans have tried to claim that the attack was “a mistake,” a 2003 inquiry by an independent commission led by a retired four-star Navy admiral, announced on Capitol Hill that all the evidence indicated that the attack had been intentional and consisted of an act of war against the United States by Israel.

The panel also said that it found that a cover-up had been ordered by the White
House.

In addition, the commission found that rescue flights had been recalled by President Lyndon Johnson and Secretary of Defense Robert McNamara. While almost no media covered the Capitol Hill briefing, a full record of its findings are in the Congressional Record and Stars and Stripes military newspaper.

In a column published by the Galveston News, Toenjes explained that he was undertaking the voyage for two primary purposes: To honor the men who died in service to their country and to try to draw attention to attempts by their surviving families and crewmates to obtain the full government investigation that is legally required but that has been blocked by the powerful Israel Lobby.

Toenjes’ trip is being tracked on the website of the Council for the National Interest (CNI).

When he arrives at his destination, the CNI website will stream live his memorial service, which will be carried by satellite phone to a radio program hosted by a Liberty survivor, Phil Tourney.

While the national media have ignored this voyage, Toenjes and Liberty survivors hope that the American public will learn about his undertaking by word of mouth, blogs, and social media.