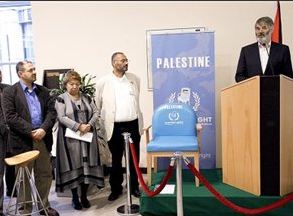 The homemade Palestine seat at the United Nations, that was made as a gesture of the Palestinian right to statehood, made it to Brussels as part of a tour to explain the Palestinian legitimate rights, guaranteed by the International Law.The seat made it to the European Parliament amidst claps and cheers, while Palestine supporters chanted “Free Palestine” as they waved Palestinian flags.

The group accompanying the touring seat held a meeting with the special European Committee tasked with Palestine affairs, and explained the humanitarian, cultural and peaceful message this tour carries, the Maan News Agency reported.

The seat arrived in Brussels on Thursday morning on the second leg of its “Palestine Deserves” tour after Paris.

The seat was displayed all day long at the parliament while Ahmad Al Baz, Ahmad Dary, the Palestinian Ambassador to the EU, Laila Shaheed, embassy personnel, Hady Shalaby and Majed Bamia, held a meeting with the special EU Committee.

Member of EU Parliament, Margaret Auken of the Danish Green Party, attended the meeting along with several Green Party officials, and representatives of different political parties at the EU Parliament.

Later on, a press conference was held and was attended by several officials, including Former Slovenian Foreign Minister, Ivo Vajgl, along with representatives of socialist and communist parties, in addition to Arab and foreign ambassadors at the EU.