Erdugan: ‘We Will Protect Our Ships En Route To Gaza’ 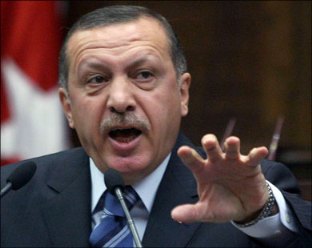 Turkish Prime Minister, Recep Tayyip Erdugan, stated Thursday that Ankara intends to protect and support all Turkish ships, loaded with humanitarian aid, bound to the besieged Gaza Strip. “Turkey will be serious involving surveillance of international waters. It also took some steps to prevent Israel from the unilateral use of natural resources in the Eastern part of the Mediterranean Sea,” the Turkish PM said in an interview with Qatar-based, Aljazeera.

The Erdogan said in a conference with his Luxembourg counterpart Jean-Claude Junker that “The Turkish-Israeli ties would not be normal again unless Tel Aviv issues an official statement apologizing for its attack, and unless it pays compensation to the families of the victims who were killed aboard Marmara flotilla that was attacked by the Israeli Navy last year, the Anatolia News Agency reported.

He also demanded Israel to lift blockade imposed on the Gaza Strip, .

Commenting on Israel rejection to return the Turkish Heron drones, Erdogan stated; “enough is enough, we paid the maintenance costs and Israel must hand the drones back”. He also pointed out that there are six Turkish aircraft of the same model in Israel.

The Turkish-Israeli relations witnessed further deterioration last week after Israel refused to apologize for its attack on Turkish ship, Marmara, and the resulting death of nine Turkish activists; dozens of activists were wounded.

Ankara expelled the Israeli ambassador and froze all military and diplomatic ties with Tel Aviv.