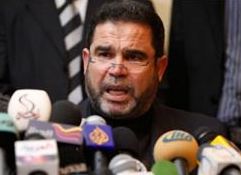 Dr. Salah Bardaweel, one of the senior political leaders of the Hamas movement, warned of what he called “the dangers of the Palestinian-UN bid” asking the UN to recognize a Palestinian State in the 1967 border, adding that this move is an “uncalculated leap into the air”, and a “move that leads to recognizing the Zionist entity”.Bardaweel said that this move “carries uncalculated risks that underestimate the resistance”, and “will lead to dropping Jerusalem and the Right of Return of the Palestinian Refugees”.

Talking to Quds Press, the Hamas leader said that the UN-bid is a very dangerous move that was not properly weighed, and that this move has no “legal or political grounds”, the Hamas-affiliated Palestine-Info, reported.

Hamas was never a member of the PLO, and conditioned joining it by conducting massive reforms.

Bardaweel explained his stances by stating that the UN-bid for statehood poses serious risks on several political issues, mainly the Right of Return of the Palestinian refugees to their lands (that became Israel following the occupation of 1948), and that “recognizing the Zionist entity means recognize West Jerusalem as the capital of this entity”.

He said that the Palestinians must continue the resistance to establish their state, and then seek international recognition.

The Hamas official further stated that the movement’s decision is based on “pure national considerations”, and comes to protect the legitimate rights of the Palestinian people.

“Some say that the position of Hamas is coherent with the United States and the Zionist entity, this is an outrageous trick that aims at harming Hamas”, Bardaweel said, “Hamas rejects the UN-bid because it recognizes the Zionist entity, both America and this entity fear this move because they want to maintain manipulation over peace talks”.