PCHR Condemns Israeli Escalation against Fishermen in the Gaza Strip 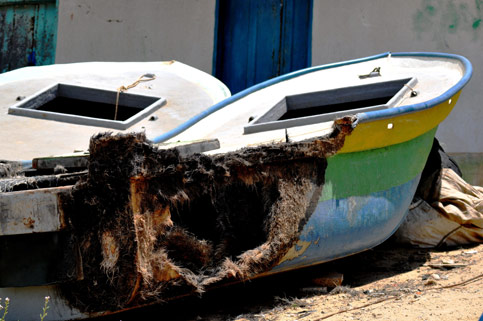 The Palestinian Centre for Human Rights (PCHR) condemns ongoing Israeli attacks targeting Palestinian fishermen in the Gaza Strip, and expresses grave concern regarding the escalation of these attacks in recent daysThis escalation has resulted in the injury and arrest of a number of fishermen, and the confiscation of a number of fishing boats. Detained fishermen were questioned, pressured to provide security information and collaborate with Israeli forces, and subject to cruel and degrading treatment.

According to investigations conducted by PCHR, at approximately 06:15 on Sunday, 11 September 2011, two Israeli gunboats stationed opposite to al-Waha Resort, northwest of Beit Lahia in the northern Gaza Strip, surrounded two Palestinian boats.

There were eight fishermen, including two boys, on board the two boats. The gunboats opened fire on the two Palestinian boats. As a result, two fishermen were wounded by shrapnel. Israeli naval forces arrested the eight fishermen after forcing them to take their clothes off and jump into water, confiscated their boats and sailed to Ashdod Port in Israel.

At approximately 18:00 on the same day, Israeli forces released ‘Allam Naser Baker; Mohammed Majed Baker; and Mohammed Suheil Baker, who was wounded by shrapnel in the right thigh during his arrest. They were released via Beit Hanoun (Erez) crossing.

Approximately 3 hours later, Israeli forces released Hassan Khader Baker, who was wounded by shrapnel in his left hand during his arrest, and his sons Ja’far, Mohammed and Khader; Khalil Jawhar Baker via Beit Hanoun (Erez) after they were questioned regarding their work. In his testimony to PCHR, a released fisherman stated that Israeli forces blindfolded the fishermen when transporting them to Ashdod Port and handcuffed them all with iron chains.

He added that after four hours of waiting under cruel conditions, they were subjected to questioning and that interrogators offered them money in order to collaborate with the Israeli Internal Security Service (Shin Bet).

At approximately 07:15, on 13 September 2011, Israeli gunboats sailing opposite to al-Sudaniya coast, west of Jabalia in the northern Gaza Strip, opened fire at Palestinian boats. The Palestinian fishermen were able to escape in great fear of being arrested or wounded.

PCHR has also documented 38 cases of shooting, including five that resulted in injury to eight fishermen; five cases involving chasing fishermen that resulted in arrest of 18 fishermen; and 19 cases that led to the confiscation and damage to boats and fishing tools.

It should be noted that Israeli forces have imposed more restrictions on the work of fishermen in the Gaza Strip.

Since 2000, fishermen have been prevented from exercising their right to sail and fish.. Israeli forces reduced the area of fishing from 20 nautical miles, which was agreed upon in the agreements signed between the Palestinian and Israeli sides, to six nautical miles in 2008.

Israeli forces have continued to prevent fishermen from going beyond three nautical miles since 2009. Hence fishermen are prevented from reaching areas beyond that distance where fish are abundant.

Sometimes, Israeli forces chase fishermen within three nautical miles. As a result, the Palestinian fishermen have lost 85% of their income because of limiting the fishing area.

1- Condemns the recurrence of violations recently committed by the Israeli naval forces against the Palestinian fishermen. PCHR believes that these violations are committed in the context of the escalation of collective punishment policies against civilians, and they are part of fighting the civilians in their means of subsistence, a matter that is prohibited under the international humanitarian law and international human rights law;

2- Calls upon Israeli forces to immediately stop the policy of chasing and arresting the Palestinian fishermen and to allow them to sail and fish freely;

3- Calls upon Israeli forces to return the confiscated boats to their owners immediately and compensate them for the damage of trapping the boats for a long time or for any other damage that might have incurred to them;

4- Calls for paying compensations to the victims of the Israeli violations for the physical and material damage caused to fishermen and their property;
5- Calls upon the international community, including the United Nations and its agencies, to assume their legal and moral responsibility through immediate and urgent intervention to stop all the Israeli violations, including the ongoing naval blockade imposed on the Gaza Strip and deprival of fishermen of over 85% of their livelihood through limiting the fishing area to three nautical miles.