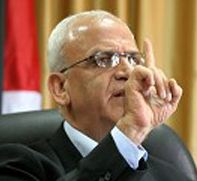 Chief Palestinian negotiator, Dr. Saeb Erekat, stated Thursday that there is a misunderstanding of the goals behind the Palestinian UN recognition bid, the Palestine News Agency (WAFA) reported Thursday.“It seems that there is a misunderstanding regarding the aim of the September bid, as independence had been announced in Algeria in 1988′, Erekat told reporters at a political symposium in the city of Ramallah, ‘The bid also does not involve obtaining recognition from the UN, but world countries recognition of Palestine, and legitimate rights”.

He added that “The Palestinian bid aims at obtaining a full membership at the United Nations based on establishing a Palestinian State in the borders of 1967, with Jerusalem as its capital.”

Erekat added that this step is just the beginning of a long way towards Palestinian statehood. The September bid does not aim at delegitimizing any state, but to delegitimize and Isolate the Israeli Occupation.

“The Palestinian-UN bid is part of a strategy based on establishing a Palestinian state on the 1967 borders and changing the status-qua,” he said.

Erekat warned of the Israeli Army decision 1650 that aims at abandoning the army’s responsibilities in the Occupied Territories.The move would lead to escalating attacks by the settlers, and further deterioration

He also presented some examples of countries that took long time to achieve a full membership at the UN, such as Macedonia, Japan and Jordan.

“Anyone who believes in the importance of peace and the two-state solution, must support our bid at UN” he told reporters.

Moreover, Erekat said the training and preparation of the Palestinian security forces is a right step towards marinating the security in Palestine, under a government that includes multiple parties

“If the UN recognizes a Palestinian state, I don’t think that settlements and Israeli violations will be removed immediately. However, the difference is that Palestine will be a state occupied by another UN member state’. The Palestinian official added, ‘Final status negotiations will be conducted through a clear timetable for Israeli withdrawal, and the Palestinian self-determination. Additionally, negotiations over prisoners and refugees will be more effective this way”.

Palestinian security services spokesman, Adnan Ad-Damiri, stated that the security forces are on standby and ready to perform their duties once a Palestinian state is established.

“Statehood is the basis of world peace and counter-terrorism activities’ Erekat elaborated, “Without any fair solution for the Palestinian cause, there will be no stability all over the world”.

“Israel is trying to drag us into violence to get out of its political and diplomatic crisis’ he added.