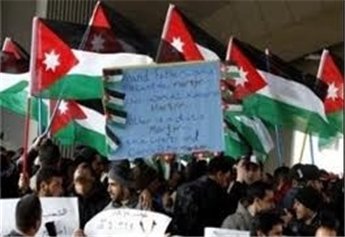 Hundreds of Jordanians demonstrated Thursday evening in front of the Israeli Embassy in the Jordanian Capital of Amman, calling for shutting it down and cancelling the Israeli-Jordan treaty of Arava, the Maan News Agency reported, Jordanian security forces spread out around the Israeli embassy building; blocking all roads to the building to prevent protesters from getting into the embassy nevertheless the Israeli ambassador and other personnel have been recalled back to Tel Aviv early this morning. Maan added.

Some demonstrators tried to break down the railings, erected around the embassy premise then clashes between the security forces and the demonstrators occurred which has led protesters to back off, the Jordanian Al-Ghad Newspaper reported.

Some 150 Islamists joined the protests after having finished the “Maghrib prayers” at Al-Kalouti Mosque” in Amman.

The number of protesters is about 300 people nevertheless several Islamic and popular parties announced their participation in the demonstrations.

Tel Aviv recalled its ambassador to Jordan Wednesday as fears of breaking in the embassy building as a result of riots which broke up last week in front of the Israeli Embassy in Cairo.