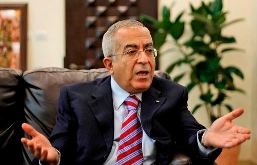 The Associated Press reported that Donor countries reaffirmed their belief that the Palestinian Authority in the West Bank is ready for statehood, and that the efforts to boost local institutions and the economy witnessed a remarkable achievement, yet warned current Israeli restrictions could jeopardize all efforts.The AP added that support from donors, the International Monetary Fund (IMF), world leaders, the World Bank and the United Nations, was declared following high-level meetings held at the General Assembly of the United Nations.

Chairman of the Donors Support Group, Norwegian Foreign Minister, Gahr Stoere, stated that all efforts for building strong institutions in Palestine are considered “a remarkable success story on the international level”.

He added that the committee was pleased about the reports of the World Bank, the International Monetary Fund and the United Nations, as they all indicated that the P.A was successfully running state institutions.

Stoere added that the International community must protect these achievements, and support them.

On its part, the World Bank warned that the achievements made by the P.A are at increasing risks, and that such risks would undermine all achievements needed to build strong state institutions.

In April this year, the International Monetary Fund said that the P.A is capable of running thorough economic policies that would ensure a well-functioning future state.

Yet, the IMF warned that West Bank economic growth declined from %8 in 2010, to %4 in the first half of 2011, due to a decline in international aid, adding that donor countries must urgently donate $300 Million to fill the gap of in the Palestinian financial requirement of $1.1 billion for this year, the AP reported.

Furthermore, Stoere stated that the ongoing Israeli occupation in the West Bank, and the siege on Gaza Strip, pose a serious risk to economic growth, and that the hesitant donor support to the P.A comes during a critical stage.

He added that donors want to see the stalled Palestinian-Israeli peace talks getting out of its current idle state.

Palestinian PM, Fayyad, said that both donor countries and Israeli itself must support the Palestinian transition from a donor-reliant authority, to a self-reliant state.

Israel collects millions of dollar in taxes and costumes on the borders on behalf of the P.A, but is refusing to transfer the money under different claims, including the unity agreement between Fateh and Hamas, although so far, the agreement remains on paper, far away from real implementation.

Different Palestinian factions reiterated the need for full unity among all factions in order to maintain a stronger internal front.