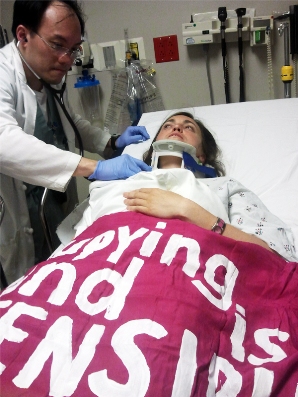 A Jewish human rights activist who stood up to challenge the Israeli Prime Minister’s address to the US Congress this spring and call for equal rights for Palestinians has filed charges against four security officers who she says tackled and injured her.Rachel Abileah, a California-based human rights activist and organizer with CodePink for Peace, is seeking $500,000 in compensatory damages and $500,000 in punitive damages for assault, battery and false imprisonment.

During Israeli Prime Minister Binyamin Netanyahu’s speech to the US Congress, Abileah stood up and began shouting ‘End the Occupation! Equal Rights for Palestinians!’. She had been allowed into the talk as a guest of a member of Congress, because she had been attending the American Israel Public Affairs Committee convention.

Four security guards jumped on Abileah and tried to gag her, to stop any further outburst. She alleges that the guards snapped her neck back, injuring it, then pushed and pulled her in an attempt to remove her from the premises.

She told reporters that the incident ’caused her to suffer severe emotional distress, including trouble sleeping, nightmares, a heightened emotional state, increased stress, fear and anxiety, especially when around large groups of people.’

Abileah filed her lawsuit against the officers in DC Circuit Court.