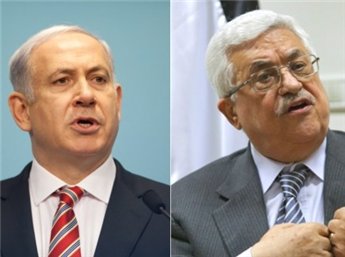 Palestinian president, Mahmoud Abbas, said that he is ready to meet with the Israeli Prime Minister, Benjamin Netanyahu, and any other Israeli officials as along as they have something new to offer, the Maan News Agency reported late Monday. “I do not have any problem meeting with Netanyahu or any other Israeli official, but the most important thing that if there is anything new they would offer,” he said in a televised interview with the American Fox News station, responding to Netanyahu’s call to meet with Abbas in New York. “Peace talks are still a Palestinian option based on the borders of June 4th, 1967” added Abbas.

Abbas sent a letter during the interview to the US President, Barrack Obama, reminding him of the promise that Obama made to Abbas “You promised me an independent Palestinian state by the end of September 2011, I hope you keep up your promise” Abbas said to Obama during their meeting last year.

Late on Monday, the US Secretary of State, Hillary Clinton, reconfirmed the US stance of using veto against the Palestinian bid for statehood, calling on both side, Israel and Palestine, to re-launch direct negotiations as the only way toward achieving peace in the Middle East, pointing out that there is still enough time to find the ways to get out of the current impasse.

Although pressure is being imposed on the Palestinian President, he is still determined to head to the international body and requesting a full membership for Palestine at the UN. The P.A President held a meeting with the UN Secretary-General, Ban Ki-Moon and agreed to submit the bid officially on Friday at 21:45 pm NY local time.

On Tuesday, Benjamin Netanyahu is flying to New York, attending the UN General Assembly annual meetings on 20th of Sep. He will be delivering his speech to the UN General Assembly late on Friday. Moreover, he would meet with the US President, Barrack Obama, on Tuesday or Wednesday to discuss the ongoing situation in the Middle East.

Otherwise, the Palestinian President, Mahmoud Abbas, arrived in New York on Monday, intending to attend the UN General Assembly annual meetings to deliver his speech and submit his bid for statehood in the international body.