Israeli Embassy Officials Back In Cairo 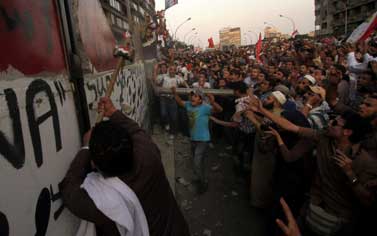 The Al Ahram Egyptian paper reported, on Monday evening, that four Israeli diplomats working at the Israeli Embassy in Cairo have resumed their duties at the new building of the Israeli embassy in Cairo. The paper did not specify the new location of the embassy.Also, the Israeli Radio reported that Israel’s Ambassador, Yitzhak Levanon, will not be back in Cairo at the current stage.

According to the report, Levanon stated that four embassy officials (a consul, an advisor, the chief of staff, and his deputy) arrived in the new location of the embassy, but only stated that the four have taken office in the building.

The Ambassador and embassy personnel will be returning to Cairo later on. Al Ahram did not specify the new location of the embassy,

The Israeli embassy was shut down ten days ago after dozens of Egyptian protesters surrounded it, while some protesters stormed its gate. One of the protesters climbed up the building and removed the Israeli flag.

Israel then evacuated all embassy staff and their families, The Israeli Deputy Ambassador did not leave Cairo following the protests,

Israeli Ynet News reported that the four officials arrived in Cairo following extensive talks between Israel and Egypt, as several Israeli security officials discussed with Cairo the possibility of relocating to a new building.

Sources at the Israeli embassy in Cairo stated that, despite the fact that Levanon will not be back in Cairo at the current stage, the developments “are considered a step in the right direction”.