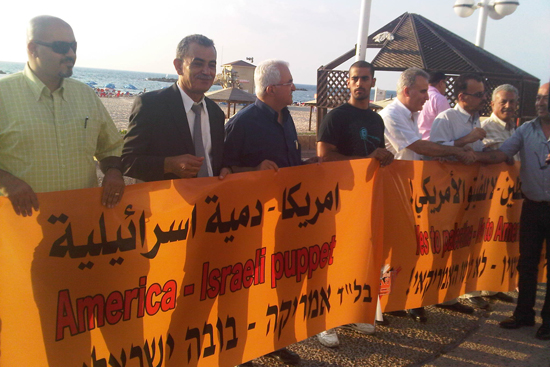 Dozens of members and supporters of the National Democratic Assembly held on Tuesday evening a protest in front of the American Embassy in Tel Aviv, demanding the U.S. not to veto the Palestinian statehood bid at the United Nations, the Arabs48 news website reported. The protesters carried signs that read, “America – Israeli Puppet”, “Yes for Palestine, No for American veto”, “America, the mask fell from the mask”, “Down with the last fortress of colonization”, “No for abandoning the Right of Return”, and other posters calling for liberty and independence.

They also chanted slogans affirming the legitimate Palestinian demands for statehood and independence.

The Arabs48 said that the head of the National Democratic Assembly (NDA), Wasel Taha, NDA Secretary-General, Awad Abdul-Fattah, his deputy Mustafa Taha, and dozens of members and supporters participated in the protest.

Taha stated that this protest is just the beginning of national activities to protest the American-Israeli policies that reject the legitimate Palestinian right of establishing an independent state with Jerusalem as its capital.

“We believe that heading to the United Nations is a step in the right direction, we call on the Palestinian leadership to go ahead, isolate Israel and its anti-peace policies”, Taha stated, “This move also exposes the American policies that reject the legitimate Palestinian rights, while at the same time, Washington claims supporting the Arab Spring”.

Arab Member of Knesset, Hanin Zo’by, stated that this protest is a protest against the American veto, and a message to the Arab world that the time has come to remove the U.S from its mediation role.

“This veto end the American role as a mediator in the Middle East”, she said.

She also stated that what is needed now is more determination to achieve international legitimacy, and that any country that wants to mediate in peace talks, must base its mediation on International Law, Human Rights, and the legitimate rights of the Palestinian people.