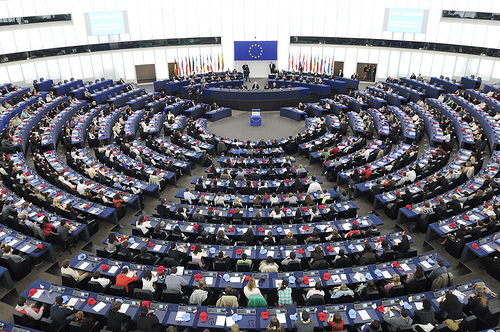 Five members of the European Parliament sent a letter to the European Union’s Foreign Policy Chief, Catherine Ashton, and the 27 E.U foreign ministers, urging them to vote in favor of the Palestinian bid for statehood at the United Nations, Palestine & News agency (WAFA) reported late Tuesday.“Obtaining Palestine a full membership at the international body is the right to guarantee success of the P.A president policy, and his Prime Minister, Salam Fayyad, with the non-violence and democracy strategy in order to end the Israeli-Palestinian conflict as well as removing the Israeli Occupation from the Occupied Palestinian Territories (OPT) and Eastern Jerusalem,” the letter says.

“Palestinians have been waiting peace for 20 years to be achieved since the Palestine Liberation Organization (PLO) agreed to establish a Palestinian state on the 1967 borders, which is form only 22% of the historical Palestine,” it adds.

“Palestinians have the same rights of democracy and a bright future, as all peoples of the world do have such as Tunisia, Egypt, Libya, the Yemen and Syria,” members of the parliament assured, saying that “The E.U should be supporting the strategies of non-violence and democracy which is the good of democracy in the Middle East.”

“This is a defining moment for the Middle East, and all decisions we (E.U & US) are making these days will affect our relations for more than one generation,” They add, confirming that “We are not exaggerating if we say that the peace process is at stake.”

The Palestinian bid has wide support all over the world, in which many countries in Europe, Asia, Africa and the Southern America support and would vote for the full membership bid at the international body. Otherwise, the United Stated frankly declared that it would veto the Palestinian bid at the UN Security Council, claiming that the only way toward a tow-state solution is through re-starting direct negotiations with Israel. The US Department of State has warned that it would use its all power to avert the showdown in the international body and to void the Palestinian bid for full membership.

In addition, Israel strongly rejects the Palestinian bid at the UN, claiming that it would destroy the peace process in the Middle East, adding that Israel is calling on the Palestinian Authority for the resumption of direct peace talks in order to achieve peace and maintain security.