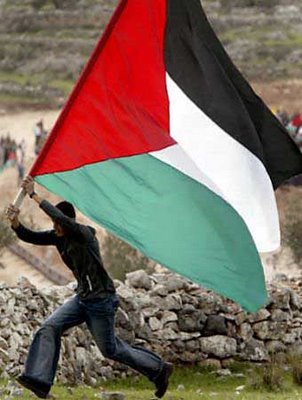 Large marches are planned by Palestinian groups on Wednesday in all districts of the West Bank to support the Palestinian bid for full membership in the United Nations. One of these rallies will be taking place in the City of Ramallah in which the Palestinian Authority headquarters are stationed, the Maan News agency reported late Tuesday.According to the schedule set by the national committee in the district of Ramallah and Al-Beireh, marches will start at 9:30 am, at which time students, scouts, governmental sector employees and national groups will gather in front of the shrine of late Palestinian President, Yasser Arafat, and march to Yasser Arafat Square at 10:30.

The general assembly of the Palestinian teachers’ union called on all employees of the ministry of higher education, public school employees, private schools, and UNRWA schools to participate in the rallies taking place on Wednesday, to show their support for the Palestinian bid for full membership as a state and United Nations Resolution 194.

In a statement released to the press, the teachers’ union expressed appreciation for all teachers, describing them as “knights of education for our future generations, who will continue the fight to remove the Israeli Occupation and to establish an independent Palestinian state with Jerusalem as its capital”, adding “We praise the pioneering role of teachers in all levels of the Palestinian struggle for liberty and independence.”

A mass rally was taken place in the Romanian capital of Bucharest late Tuesday, included hundreds of Romanians and Arab and foreign diplomats, as well as members of the Palestinian and Arab community in Romania. The Palestinian community in Romania called for the rally as a show of support for Palestinian President, Mahmoud Abbas, during his upcoming speech at the UN General Assembly, scheduled to take place on Friday, in order to submit his bid for full membership in the international body.

Rallies are taking streets in most countries of the world this week to support the Palestinian bid for statehood, as Palestinian President, Mahmoud Abbas, heads to the United Nations to submit his bid for full membership at the UN General Assembly on September 23rd.