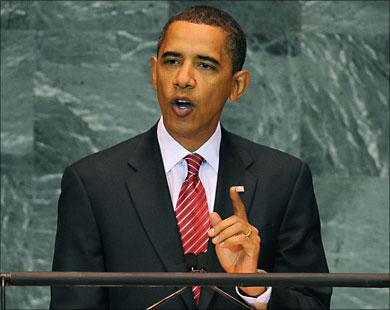 The White House announced that the US President, Barack Obama, would hold a closed-door meeting with Palestinian President Mahmoud Abbas on Wednesday evening outside the UN General Assembly meetings in New York, the French Press Agency reported on Wednesday. “President Obama will be holding a meeting with the PA President, Mahmoud Abbas, at 18:00 pm NY local time (22:00 GMT)” said the deputy of the US National Security Advisor, Ben Rhodes.

The meeting, which was not on Obama’s agenda, comes just before the Palestinian President plans to submit his bid for full membership at the United Nations on Friday.

Rhodes reiterated the US Administration’s position, which is to call off the UN bid and “find a base for the resumption of the stalled Palestinian-Israeli peace talks” to reach an independent Palestinian state. Palestinians claim that, as in past peace talks, the only thing that would be negotiated is how much more of their land the Israelis would be allowed to take, and they hope the statehood bid will provide the ground to negotiate from the position of a state rather than Occupied Territories.

The announcement of the meeting between Abbas and Obama came in the midst of an ongoing pressure campaign imposed on the Palestinians by the US government in an attempt to avert the showdown at the international body.

On Tuesday, Abbas held meetings with French President Nicolas Sarkozy, and British Foreign Minister William Hague. France and Britain are among a select few nations to hold a permanent full membership in the UN Security Council.

The British Foreign Minister William Hague stated that the international Quartet for Middle East Peace, including the US, UN, Russia and EU, did not make any progress regarding the resumption of the halted Israeli-Palestinian negotiations.

The US Administration is intensifying its efforts to push the member states in the UN General Assembly, the vast majority of which have pledged support for Palestinian statehood, to stop supporting the Palestinian bid for full membership at the international body. In doing so, the US administration hopes to avert the embarrassment of having to veto the Palestinian bid. These efforts come just one year after Obama delivered a speech saying that he hoped to see a Palestinian state engaging the United Nations in 2011.