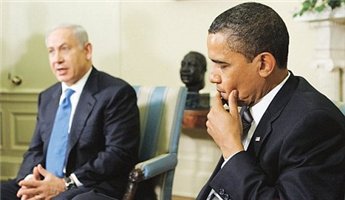 According to a report published Wednesday by the New York Times newspaper ahead of Wednesday’s meeting between US President, Barack Obama, and Israel’s Prime Minister, Benjamin Netanyahu, the Obama administration has solicited the assistance of Netanyahu to influence the Republican party in Congress on the Israel-Palestine issue.The Israeli government and its supporters in the US have for decades worked to exert influence on both Democratic and Republican members of Congress. Over 80 Congressmembers of both parties visited Israel during the August recess this year, in the only lobbyist-sponsored trips that are allowed by the US Congress.

During that trip, Obama’s request to Binyamin Netanyahu that he help influence Republican members of Congress to support a $50 million aid package for the Palestinian Authority became apparent.

One of the members of Congress who attended the meeting with Mr. Netanyahu in August, Representative Michael G. Grimm of New York, a Republican, said that it was carefully explained to the delegation that the money would be used for training Palestinian police officers who work closely with the Israeli government.

As the diplomatic showdown at the UN begins this week, its clear that Obama needs Netanyahu to be able to pass any decision in the Congress, the paper reported.

But influential Zionist Republican Congressmember Eric Cantor made clear that the Palestinian bid for statehood at the United Nations this week will hinder any future aid to the Palestinian Authority from the US government.

The US has pledged to provide Israel with $30 billion in aid money over the next ten years. This does not include military contracts and loans that are not required to be paid back. No equivalent pledge has been made to the Palestinian Authority, who have received $150 million from the US this year (which is approximately 5% of the amount of money given by Washington to Israel this year).

According to the New York Times analysis, Netanyahu’s intervention in Congress underscores an extraordinary intersection of American diplomacy and domestic politics, which is the result of an ever-tightening relationship between the Israeli government and the Republican Party that now controls the House.

On Tuesday, one of President Obama’s potential rivals for the presidency in 2012, extreme conservative Governor Rick Perry of Texas, delivered a speech in New York criticizing Obama’s stance toward Israel as “naïve, arrogant, misguided and dangerous.” Mr. Perry said that he would soon be a guest of Danny Danon, the hard-right deputy speaker of the Israeli Parliament.

The analysis by Times reporters adds that the relationship between the Israeli government and the Republican Party has significantly complicated the administration’s diplomatic efforts to avert a confrontation at the United Nations this week over the Palestinian bid for full membership as a state. This relationship. the reporters say, has limited President Obama’s ability to exert pressure on Netanyahu to make any concessions that could restart negotiations with the Palestinians.

For the Republican party, the analysis continues, their relationship with the Israeli government has created what many in the party see as an opportunity. According to the New York Times, ‘Mindful of Mr. Obama’s strained relationship with Mr. Netanyahu and emboldened by a special election victory last week in a heavily Jewish Congressional district in New York, Republicans hope the tensions between Mr. Obama and Israel — underscored by the latest developments at the United Nations — will help propel future political victories for their party.’