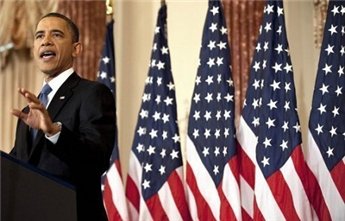 US President, Barack Obama, told the UN General Assembly that the Palestinians deserve a state of their own, but added that this state can only be established through direct peace talks with Israel, the Maan News agency stated. “I am convinced that there is no short cut to the end of a conflict that has continued for decades’, Obama said, ‘Peace will not come through statements and resolutions at the UN”.

“Ultimately, it is the Israelis and Palestinians – not us- who must reach agreement on the issue that divides them: on borders and security, on refugees and Jerusalem, peace is based on concessions” he added.

He also reconfirmed that ‘U.S. commitments to Israel’s security are unshakable’, urging allies to recognize the two-state solution.

During his speech at the opening ceremony of the 66th Session of the General Assembly, Obama stated that ‘the only road to peace is through negotiations between Israel and the Palestinians’.

Obama further stated that ‘the Jewish people built their state under tough situations’, and that ‘Israel is surrounded by neighbors who fought wars against it’, the Maan News Agency reported.

The U.S president also said that Washington believes that peace in not only the absence of war, but the fight against ignorance, disease and terrorism.

His statements did not address the plight of millions of Palestinian refugees who were displaced and forced out of their homeland when Israel was created in 1948 in the historic land of Palestine.

He also failed to mention the ongoing Israeli aggression against the Palestinian people, and the ongoing settlement construction and expansion in the occupied West Bank and in occupied East Jerusalem.

Obama also did not mention the fact that Israel ignored several Security Council and United Nations resolutions calling for a full withdrawal from the Palestinian territories occupied by Israel in 1967, including occupied East Jerusalem.