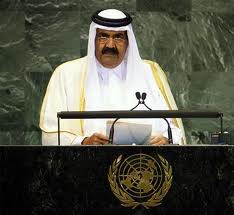 The Prince of Qatar, Sheikh Hamad bin Khalifa Al Thani, expressed support for the Palestinian UN membership bid, and condemned the Israeli occupation and the ongoing construction and expansion of Israeli settlements in the Occupied Territories.“After the failure of peace talks between the Palestinians and the Israelis, and the ongoing Israeli Occupation of the Palestinian Territories and the Golan Heights, as well as the tightening Israeli blockade and the bombing of civilians in the Gaza, the Palestinians have the right to be free and create their independent state.” He said in a speech to the UN General Assembly Wednesday evening.

His statements came during the opening ceremony of the General Assembly’s 66th Session.
‘We are pro dialogue between all cultures and peoples, we are pro reconciliation based on justice and truth’, the Sheikh said, ‘This justice must be based on all international laws and treaties, treaties set by the generations of yesterday for a better future for the peoples of tomorrow’.

He also stated that the Arab region is witnessing the winds of change as pro-democratic protests are taking place in different Arab states, and added that Arab leaders cannot just ignore the demands of their people.

“The Arab Spring is forcing us to change, the winds of change are blowing, demanding democracy as well as the end of tyranny and oppression” he told U.N.

He further stated that the central issue in the Middle East is the Palestinian Cause, the Israeli occupation of Palestine, the Golan Heights, The Shebaa Farms in Lebanon, in addition to the deadly Israeli siege on the Gaza Strip.

‘For four decades, efforts for peace building have failed due to Israel’s rejection to recognize the legitimate Palestinian and Arabs rights, Israel’s rejection for a comprehensive peace agreement’, the Sheikh added, ‘Israel believes that its military power can bring it security, and insists on using peace talks in order to create facts on the ground’.

He further voiced an appeal to all UN-member states to vote for the Palestinian statehood-bid, and to enable the Palestinians to become full members of the UN, similar to other nations in the world.