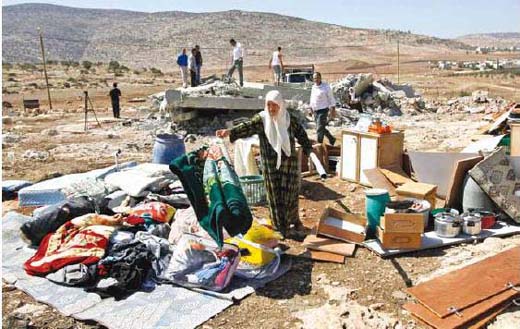 Israeli forces conducted 38 incursions into Palestinian communities in the West Bank, during which they abducted 18 Palestinians, including 7 children and a member of the Palestinian Legislative Council.

Israeli forces have established checkpoints in and around Jerusalem, severely restricting Palestinian access to the city. Civilians are frequently prevented from praying in the al-Aqsa Mosque in Jerusalem.

There are approximately 585 permanent roadblocks, and manned and unmanned checkpoints across the West Bank. At least 65% of the main roads that lead to 18 Palestinian communities in the West Bank are closed or fully controlled by Israeli forces.

On 15 September 2011, a number of Israeli settlers traveling in two civilian vehicles arrived at the western entrance of Beit Fourik village, east of Nablus. They stepped down and set fire to two Palestinian civilian cars belonging. The three cars were totally burnt.

On the same day, a number of Israeli settlers from “Gilad” settlement, east of Qalqilya, set fire to agricultural areas in Jeet village. As a result, large areas of agricultural land were burnt and at least 150 trees were destroyed.

On the same day, a number of Israeli settlers from “Ariel” settlement, north of Salafit, damaged many olive trees belonging to Bassel Mahmoud Abu ‘Eissa in Kufor Hares village to the north of the aforementioned settlement.

Also on the same day, a number of Israeli settlers moved into Seilat al-Zaher village near Jenin. They attempted to place a mobile home on the land where the evacuated “Homesh” settlement used to stand, but Israeli forces evacuated them.

On 16 September 2011, Fat’hallah Mahmoud Abu Raida and his sons arrived at their land located at Qasra-Jaloud village near Qasra village, southeast of Nablus. Soon, they saw at least 10 Israeli settlers in the area, 4 of whom were armed. One of the settlers took his clothes off completely and washed in a pool. Abu Raida phoned the local council of the village and some villagers, who came to expel the settlers. Immediately, the settlers fired into the air to drive villagers away from them. As a result, Abu Raida was wounded by shrapnel from bullets to the leg. Soon after, Israeli forces arrived at the area and fired tear gas canisters at the Palestinian villagers.

On the same day, while Israeli forces were using force to disperse a peaceful demonstration organized by Palestinian civilians against Israeli settlement activities in the south of Beit Ummar town, north of Hebron, a number of Israeli settlers from “Karmi Tsur” settlement attempted to force journalists away from the area. They insulted the journalists, and one of them attempted to attack Ma’moun Isma’il Wazwaz, 35, a cameraman of Reuters. When Wazwaz attempted to defend himself, an Israeli officer intervened and threatened to arrest him. The officer then forced Wazwaz and other journalists to leave the area.

On 17 September 2011, a number of Israeli settlers from “Efrat” settlement, south of Bethlehem, attacked a car, in which 4 Palestinian civilians were traveling. The car was damaged.

On 18 September 2011, a number of Israeli settlers from “Gilad” settlement, northeast of Qalqilya, set fire to Palestinian agricultural areas in Jeet village. As a result, 20 olive trees were burnt.

On 19 September 2011, a number of Israeli settlers moved into Seilat al-Zaher village near Jenin. They set up tents on the land where the evacuated “Homesh” settlement used to stand, but Israeli forces evacuated them.

On the same day, Israeli forces uprooted 500 olive trees belonging to the heirs of Dawod Yousef Zaidan in Wad Edris area in Deir Estia village, northwest of Salfit. The Israeli liaison informed the Palestinian side that on Wednesday, 14 September 2011, Israeli forces cut 135 olive trees in Wd Abu Edris area in the west of Deir Estia village, claiming that they were planted on “state land,” but the rela number of the trees that were cut is 500.

On 20 September 2011, hundreds of Israeli settlers, escorted by Israeli forces and the Israeli police, moved into Kufol Hares village, north of Salfit, allegedly to visit Jewish shrines. Before leaving the village, the settlers threw stones at Palestinian houses. No damage was reported.

On the same day, at least 50 Israeli settlers gathered near “Mavo Dutan” checkpoint, southwest of Jenin. They attempted to move into the nearby Ya’bad village, but Israeli forces stopped them. Israeli forces also closed the checkpoint until night.

Also on the same day, some Israeli settlers from “Yits’har” settlement, south of Nablus, stormed Southern ‘Assira village, south of Nablus. Dozens of Palestinian civilian gathered to stop the settlers. Israeli forces then moved into the village to protect the settlers. They fired tear gas canisters at Palestinian civilians. As a result, a child, was hit by a tear gas canister to the back.

On 21 September 2011, at least 30 Israeli settlers from “Dutan” settlement, southwest of Jenin, attempted to moved into ‘Arraba village, but Israeli forces prevented them.

During the reporting period, two Palestinians, including a child, died of wounds they had sustained by Israeli forces in the Gaza Strip.

In the Gaza Strip, on 16 September 2011, Khaled Suleiman Saleem Kaware’, 43, a member of Hamas from Khan Yunis, dies of a wound he had sustained during the Israeli offensive on the Gaza Strip (27 December 2008 – 18 January 2009). According to PCHR’s documentation, at approximately 16:10 on Thursday, 08 January 2009, an Israeli drone fired a missile at Kaware’ when he was at Khan Yunis –Rafah eastern road. As a result, he and another 3 Palestinians were wounded. His wound was described as serious and his legs were amputated. He entered in a coma one month later. He received medical treatment in a Saudi hospital and in al-Wafaa’ Hospital in Gaza City. Recently, he was taken home to Gaza and was on life support, until he died this week.

On 19 September 2011, Ibrahim ‘Adnan ‘Abed Rabbu al-Zaza, 14, from al-Tuffah neighborhood in the east of Gaza City, died of a wound he had sustained on 19 August 2011. According to PCHR’s documentation, at approximately 17:30 on Friday, 19 August 2011, an Israeli drone fired a missile at a number of activists of the Palestinian resistance near al-Wafaa’ Hospital in the east of Gaza City. As a result, two children were seriously wounded: Ibrahim ‘Adnan ‘Abed Rabbu al-Zaza, 14; and Mohammed ‘Aatef ‘Abed Rabbu al-Zaza, 15. Ibrahim had received medical treatment in Shifa Hospital in Gaza City for one week before he was transferred to an Israeli hospital, where he received medical treatment until his death.

During the reporting period, Israeli gunboats opened fire at Palestinian fishing boats in the Gaza Strip. No fishermen were hurt, but Israeli naval troops confiscated and damaged some fishing nets.

Israel has continued to impose a siege on the Gaza Strip, preventing access with the outside world. In just one example of the effects of the siege, Israeli forces have continued to prolong the implementation of their decision to allow 60 cars into Gaza weekly although more than 11 months have passed since they announced this decision after three years of ban imposed on the delivery of cars to Gaza. As a result, the prices of cars in Gaza have been on the rise and local markets experience serious shortage in spare parts.

Israel has continued to close Beit Hanoun (Erez) crossing for Palestinian civilians from the Gaza Strip. Israeli forces only allow the movement of limited groups amidst severe restrictions, including long hours of waiting in the majority of cases. Israeli forces have also continued to adopt a policy aimed at reducing the number of Palestinian patients allowed to move via Beit Hanoun crossing to receive medical treatment in hospitals in Israel or in the West Bank and Jerusalem. Israeli forces denied new categories of Gazan patient permission to have access to hospitals via the crossing.

During the reporting period, Israeli forces used excessive force to disperse peaceful demonstrations organized in protest to Israeli settlement activities and the construction of the annexation wall in the West Bank. As a result, two Palestinian civilians, including a child, were wounded and dozens of Palestinian civilians and international human rights defenders suffered from tear gas inhalation.

Following the Friday Prayer on 16 September 2011, dozens of Palestinian civilians and international and Israeli human rights defenders organized a peaceful demonstration in Bil’in village, west of Ramallah, in protest to the construction of the annexation wall. They moved towards areas of Palestinian land, which the Israeli High Court ordered to be returned to their Palestinian owners. The demonstrators also used megaphones to call on Israeli settlers living in “Mitityaho Mizrach” settlement to leave it. Israeli soldiers stationed in the area fired rubber-coated metal bullets, sound bombs and tear gas canisters at the demonstrators. As a result, a number of demonstrators suffered from tear gas inhalation.

Also following the Friday Prayer on 16 September 2011, dozens of Palestinian civilians and international and human rights defenders organized a peaceful demonstration in Ne’lin village, west of Ramallah, in protest against the construction of the annexation wall. They clashed with Israeli troops positioned near the annexation wall. Israeli soldiers fired rubber-coated metal bullets, sound bombs and tear gas canisters at demonstrators. As a result, a number of demonstrators suffered from tear gas inhalation.

Also following the Friday Prayer on 16 September 2011, dozens of Palestinian civilians and international and Israeli human rights defenders organized a peaceful demonstration in Nabi Saleh village, northwest of Ramallah, in protest against land confiscations in the Wad al-Raya area between the villages of Nabi Saleh and Deir Nizam. When the demonstrators attempted to reach areas of land seized by Israeli settlers near ‘Halmish’ settlement, Israeli troops fired rubber-coated metal bullets, sound bombs and tear gas canisters at them. As a result, Bakr Farah Tamimi, 25, was hit by a tear gas canister to the right shoulder, and a number of demonstrators also suffered from tear gas inhalation. Israeli forces also abducted Ashraf Ibrahim Abu Rahma, 30, but released him at approximately 22:30.

On Wednesday noon, 21 September 2011, dozens of Palestinian civilians organized demonstration at the entrance of Qalandya refugee camp, north of Jerusalem, in support to the Palestinian leadership’s demand of recognition for the Palestinian statehood by the United Nations. They moved towards Qalandya checkpoint. They set fire to tires and threw stones and empty bottles at Israeli soldiers. Immediately, Israeli soldiers fired at the demonstrators. As a result, ‘Aahed As’ad Wahdan, 15, was hit by a tear gas canister to the left eye. Additionally, dozens of demonstrators suffered from tear gas inhalation.

Due to the number and severity of Israeli human rights violations this week, the PCHR made several recommendations to the international community. Among these were a recommendation that, in recognition of the International Committee of the Red Cross (ICRC) as the guardian of the Fourth Geneva Convention, the PCHR called upon the ICRC to increase its staff and activities in the Occupied Palestinian Territories, including the facilitation of family visitations to Palestinian prisoners in Israeli jails.

The PCHR appreciates the efforts of international civil society, including human rights organizations, bar associations, unions and NGOs, and urges them to continue their role in pressuring their governments to secure Israel’s respect for human rights in the Occupied Palestinian Territories and to demand Israel end its attacks on Palestinian civilians.