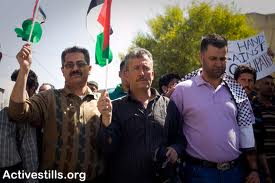 The Popular Struggle Co-ordination Committee, organizers of non-violent resistance in the West Bank, have released a press statement on Friday, stating that the trial of Bassem Tamimi has been postponed till Sunday.Tamimi, of the West Bank village of an-Nabi Saleh, has had his case postponed for the fourth time, as the Israeli Military Prosecution claims that it had called the wrong witnesses.

Tamimi was arrested, on March 24 2011, on charges of incitement and organizing protests without permit, amongst others.

This follows the testimony of 14 year old Islam Dar Ayyoub, also from the village of Nabi Saleh, which has largely been criticized as coerced. Dar Ayyoub was taken at gunpoint in the middle of the night from his home and was interrogated without the presence of either a lawyer or his parents – both of which are illegal due to Dar Ayyoub’s status as a minor.

Similar allegations were raised against the Israeli military in the case of Abdullah Abu Rahme, a Popular Committee member from the village of Bi’lin, who was imprisoned following similar allegedly coerced testimony.

Like the case of Abu Rahme, the Tamimi case has been criticized by Catherine Ashton, High Representative for Foreign Affairs and Security Policy of the European Union, who stated that the right to protest was being suppressed by Israel’s actions in their occupation of the West Bank.

It should be noted that the Popular Struggle Co-ordination Committee is a movement of activists across the West Bank committed to non-violent resistance, and are not affiliated with the the Popular Resistance Committees, who are a coalition of armed factions, mostly based in the Gaza Strip.