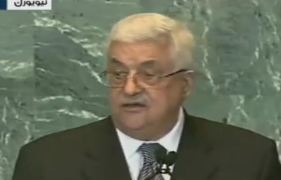 Palestinian President Mahmoud Abbas delivered his historic speech at the United Nations on Friday, officially submitting the Palestinian bid for a Palestinian state with full membership at the United Nations. He denounced the ongoing Israeli violations, settlement activities and attacks, and confirmed the Palestinian willingness for comprehensive peace based on international legitimacy resolutions. Israel claims Palestinians do not seek peace.In his speech Abbas spoke about the ongoing Israeli violations, illegal settlement activities, and Israel’s ongoing unilateral acts that deprive the Palestinians from their legitimate rights, such as the freedom of worship, the freedom of movement, and their right to their natural resources.

He also referred to the Israeli excessive use of force targeting nonviolent protests against the illegal Annexation Wall and the illegal settlements, and mentioned the Palestinian man who was shot dead by the Israeli army, on Friday, during an invasion to Qusra village, near the northern West Bank city of Nablus.

Abbas slammed that Israeli War on Gaza, the shelling and bombardment of civilian areas, and Israel’s ongoing invasions into the West Bank.

“Israel’s invasions and attacks, Israel’s illegal policies, the dangerous escalation of armed Israeli settlers and all violations will lead to the collapse of the Palestinian Authority”, the president said, “All what Israel is doing is unilateral, it annexes our lands, our water, our destiny, our future, and then they talk about our unilateral moves”.

He added that Israel is transforming the Palestinian territories into isolating ghettos, surrounded by the illegal Annexation Wall, and the illegal settlements, and is ongoing with its policies of ethnic cleansing against the Palestinians in Jerusalem by demolishing their homes, annexing their lands, and even by deporting their elected leaders, in addition to the illegal excavations under the holy sites.

“The occupation is racing time in changing facts on the ground, and is acting to foil any real opportunity to establish the Palestinian state”, Abbas added, “three years after its criminal war on Gaza, and the resulting deaths and injuries of thousands of Palestinians, Israel is still escalating its attacks and violations, and protecting the settlers who commit daily crimes and violations against the Palestinians in the West bank; such policies destroy the chances of the two state solution”.

As for Israel’s insistence that the Palestinians must recognize it as a Jewish State, Abbas said that the Israeli government is presenting new preconditions that come in an attempt to transfer the conflict into a religious one, and that Tel Aviv aims with this demand at threatening the existence of 1.5 million Palestinian living in Israel.

“We cannot and will not accept that”, the president added, “Israel reestablished its military and civil authority in the Palestinian-controlled territories, by a unilateral decision, and decided that it has the sole right to decide where the Palestinians can live, and then they talk about our so-called unilateral moves”.

Abbas also stated that in 1974, “Our late leader, Yasser Arafat, came to the General Assembly, here in this hall, confirmed to its members that the Palestinians seek peace, urged the United Nations to ensure the legitimate Palestinian rights, and urged world leaders not to make the green leaf fall off his hand”.

‘In 1988, Arafat addressed the General Assembly in Geneva, and presented the Palestinian peace agenda that was approved by the Palestinian National Council the same year during its meeting in Algeria’, Abbas added.

He also stated that “this agenda was not easy to approve, as it was a very painful and a difficult step to all of us, especially those, including myself, who were forced out of their homes and lands, carrying some clothes, their memories, and their keys, heading to the camps of exile during the Nabka of 1948, in one of the ugliest processes of expulsion, uprooting, destruction and removal of a whole society that had a leading role in the rise of the cultural, education and economic development of the Arab world”.

Abbas also referred to the different peace agreements signed between Israel and the Palestinians, and the mutual letters of recognition of the right to exist, yet, “Israel continues its unilateral moves and continues its construction and expansion of settlements, in an attempt to foil all agreements”.

He added that “in accordance to international legitimacy resolutions, the Palestinian people want to establish their independent state on all of the occupied Palestinian territories, captured by Israel in 1967, including East Jerusalem, the capital of this state”.

The Palestinian president further stated that a “just and agreed upon solution must be achieved in accordance to all related international legitimacy resolutions, and by implementing United Nations General Assembly Resolution #194 that assures the Right of Return of all Palestinian Refugees, in addition to implementing the Arab Peace Initiative that offered the foundation for ending the Arab-Israeli conflict, and achieving a compressive peace.

Abbas further expressed rejection all forms of terrorism, especially state terrorism and the terrorism of the Israeli settlers in the occupied territories.

He further stated that the Palestinian people will continue their nonviolent resistance against the occupation, the settlements and the Israeli apartheid wall, with the support of Israeli and international peace activists, “presenting an example of the power of the unarmed people who only have their courage and determination while facing the power of Israeli tanks and bullets”.

The Palestinian President also said that “by heading to the United Nations, the Palestinians are proving that there are committed to the diplomatic and political choice, and confirm that they do not conduct unilateral moves, do not target Israel’s legitimacy or seek its isolation, we seek international legitimacy for the Palestinian people, and the delegitimization of settlements, apartheid and the occupation”.

“From here, in the name of the Palestinian people and the Palestinian Liberation Organization, we tell the Israeli government, and the Israeli people, that we are extending our hand for peace, and we tell them let us build a future where our people and children can live in peace, security, progress and stability, let us build bridges for peace instead of roadblocks and apartheid Walls, let us build bridges of dialogue, a relation of friendly cooperation between two states instead of trying cancel each other out”.

He added that the Palestinian Authority is building its institutions and economy, and is seeking to be reliant on its own economy instead of international financial support.

President Abbas also said that the Palestinian Authority is building strong institutions and that with the support of several countries, infrastructure projects have been launched to develop rural areas, adding that these projects are the foundation of the future state, a state based on the rule of law, ensuring public freedoms, and equal rights for all.

The president said that recent report by the special committee of the Donor Countries, the United Nations, the International Bank and the International Monetary Fund, presented certificates saluting what the Palestinian Authority managed to achieve despite all challenges and the ongoing Israeli occupation.

Responding to the speech of Abbas, Israeli Prime Minister, Benjamin Netanyahu told that UN General Assembly that “the Palestinians do not want peace with Israel” and claimed that “Israel extended its hand for peace since the moment it was established”.

He went on to reaffirm the Israeli stance that “before seeking to establish their own state, the Palestinians must recognize Israel as Jewish State”.

Netanyahu openly rejected the legitimate Palestinian Right of Return by stating that “the Palestinian people must drop their fantasy of changing the character of the Jewish State by flooding it with millions of Palestinians”.