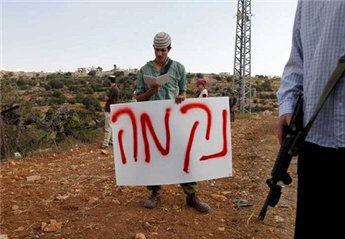 According to Israeli police, a 25-year old Israeli-American settler and his 18-month old baby were killed on Friday in a car accident that they say may have been caused by Palestinians throwing stones at the car.On the same day, the day of the Palestinian Authority’s bid for statehood at the United Nations, 20 Palestinians were injured by Israeli troops during a protest at Qalandia checkpoint near Ramallah, including a teen who lost an eye and other serious injured, a Palestinian was killed and three badly injured by Israeli gunfire at protests in Nablus, and an 8-year old child was badly wounded when an Israeli settler hit the child with his car, then fled the scene.

The following day, three Palestinians were badly injured in two separate car accidents, one caused by Israeli settlers throwing stones at the Palestinian car, and one in which Israeli soldiers opened fire on a car carrying a father and daughter on a road near Bethlehem.

In Friday’s car accident, Israeli police claim that Israeli-American settler Asher Palmer, a resident of Kiryat Arba settlement near Hebron, lost control of his vehicle south of Bethlehem after he was hit by a stone thrown by Palestinians.

Police spokesman Micky Rosenfeld told reporters with the French Press Agency that the incident is still under investigation, but the initial investigation indicated a stone caused Palmer to lose control.

A funeral for the father and son was held on Sunday, and some of the Israeli settlers present at the funeral criticized Israeli police for not initially accusing Palestinians of causing the accident. Some called for revenge against the Palestinian population of the West Bank.

Israeli police say they have no leads into the stone-throwing.