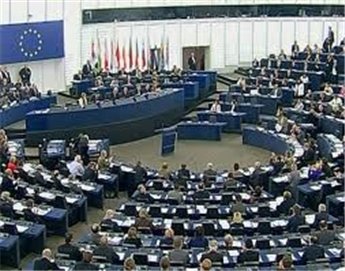 The European Parliament adopted a resolution on Thursday, confirming the legitimacy of the Palestinian-UN membership application, calling on the EU members to adopt a united decision which supports the Palestinian bid. The parliament praised the rehabilitation of the P.A institutions and its plans to establish a Palestinian state, stressing the Palestinian’s right of self-determination and the importance to find a way to end the Palestinian-Israeli conflict especially during the ongoing Arab Spring.

The House reconfirmed its support for the two-state solution on the 1967 borders with Jerusalem as a capital of the two states, Palestine and Israel, alongside a totally freeze of the Israeli settlement activities in the lands of Palestinians including East of Jerusalem.

The resolution stressed that the only way to the ending of the conflict is through peaceful ways, calling on parties concerned to return to the negotiations’ table and avoiding any steps that would damage negotiation process. The resolution further confirmed that any disagreed change on the 1967 borders mustn’t be accepted including Jerusalem.

Meanwhile, the resolution expressed the Palestinian’s right of establishing an independent state alongside the guarantee of Israel’s security.

The resolution has been adopted by a vast majority of the members of different parties in Europe. A warm applause has been made by the representatives.

“The European House assured the support of the European peoples for the Palestinian bid at the international body. This support is shown through million-protest by Avaz Foundation, opinion polls and the demonstrations that took place in all parts of Europe on Sep 21, 2011 based on the national campaign: UN194 Palestine State.

The European Parliament member, the representative of the Communist group and vice-president of Middle East Committee, Veronique de Keyzer, praised the political courage of the EP members, emphasizing the support of her group for the Palestinian-UN membership bid. She stressed the Palestine’s right to obtain a full membership after 63 years of Israel membership at the international body, and after 12 years of the European Berlin declaration of recognizing the Palestinian state in the appropriate time. She declared that “It is time for Palestine to be the UN 194 member.”

For his part, the head of Al-Khadir group, the Frenchman Denial Cohn-Bendit said during a discussion with the European Security & Foreign Policy chief, Catherine Ashton, that his group supports the Palestinian application at the UN. He further criticized that weakness of the European position so far and the Israeli policy against the Palestinians saying “Israeli, it is intransigent, it is enough.”