Bat Ye’or and The Dhimmitude of Eurabia 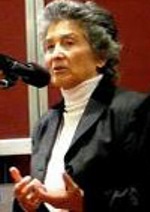 Meet Bat Ye’or, the Islamophobia industry’s favourite historian who popularised such terms as ‘Eurabia’, a Euro Arab Axis and ‘Dhimmitude’ the servile state Christians and Jews are condemned to under Islamic rule.

Born in Cairo as Gisèle Orebi to a Jewish family she and her parents were forced to flee leaving behind everything in 1956. Settling in England, she married David Littman in 1959 and moved to Switzerland.

Gisèle Littman writes under the name Bat Ye’or, Hebrew for ‘daughter of the Nile’. Now in her seventies she wrote her first book about Jews in Egypt under the name ‘Yahudiya Masriya’ which means ‘Egyptian Jewess’ in Arabic.

Bat Ye’or wrote a series of books and articles about life under Islamic rule for Christians and Jews, drawing mainly from her own experiences.

With no qualifications or academic background in history, she routinely denigrates the contributions to humanity made by successive Muslim civilisations, magnifies their intolerant periods, ignores the periods of tolerance and generally paints a selective agenda driven picture which grossly distorts the truth and ignores the wider historical context.

Despite her pretensions, she was not taken seriously in academic circles and remained on the fringes until 9/11.

Her star rose after 9/11 when bashing Islam became a lucrative business most ardently embraced by conservative extremists. Some right wing Zionists have since made it a career. Prior to 9/11 the only Islamophobe of note was Daniel Pipes.

By comparison he seems almost a moderate now, indeed he has bemoaned his growing irrelevance by whining that he does believe in a ‘moderate Islam’, a view that puts him at odds with the radical Zionist Islamophobes. These links have been previously upon elaborated in ‘The Islamophobia Industry: Zionism and The Middle East’ and highlighted by Ali Abunimah in an article for Al Jazeera English ‘Islamophobia, Zionism and the Norway massacre’ shortly after the Norwegian massacre.

One of the first to cite Bat Ye’or’s work was the Israeli American historian on Islamic history Bernard Lewis, who predicts that ‘Europe would be Islamic by the end of the century’. Self styled ‘counter jihad’ experts like Robert Spencer of Jihad Watch, Brigette Gabriel a Christian Zionist with her Act for America minions, and the shrieking Pamela Geller enthusiastically promoted Ye’or as ‘an expert on Islamic history’.

She propagates that European and Arab elites along with the Muslim Brotherhood, have a secret plan to usher in a world caliphate through the OIC. This revisionist history, packaged with images from round the clock 9/11 coverage was sold as the ‘true face of Islam’. Included in this propaganda was the mantra that 9/11 was the same threat Israel faced daily. It was in this manipulated climate of fear that the Iraq war was sold, though Saddam Hussein’s regime was secular.

Since the Anders Breivik massacre, Bat Ye’or has been under the spotlight for having been a prime influence upon the murderer. Her conspiracies however, had already been discredited prior to the Anders Breivik massacre. One of the first to deconstruct the Eurabia myth was Matt Carr of ‘The Institute of Race Relations.’ In 2006 he authored a 23 page report which is downloadable as a free PDF document ‘You are now entering Eurabia’. On page 8 Carr notes:

‘The EU’s perceived tilt towards the Palestinians is crucial to Ye’or’s indictment of Eurabia, where ‘the conception and practice of Palestinianism as a hate cult against Israel has had a profound impact on European society’ and where anti-Zionism is always synonymous with anti-Semitism.’

In his report, Matt Carr mused that the Eurabia myth had the potential of evolving from a fringe conspiracy to a ‘dangerous Islamophobic fantasy’. With hindsight his words proved to have been tragically prophetic with the Norwegian massacre. Loon Watch which has indepth and intelligent responses to Islamophobic smears published ‘Bat Ye’or: Anti-Muslim Loon with a Crazy Conspiracy Theory Named “Eurabia’.

David Horowitz’s Front Page Mag interviewed Bat Ye’or in 2006. The interview began with the pretentious introduction ‘the world’s foremost authority on ‘dhimmitude’. Ye’or was then asked to explain her new term, ‘Palestinianization’. She replies:

‘I think that it is, precisely, ’Palestinianism’ which is at the root of Europe’s decadence. It is an ideology based on a replacement theology whereby Palestine replaces Israel. As it has been conceived and instigated together by European and Arab intellectuals and politicians, it combines the worst of both cultures.’
She continues:

‘The European trend has added to it traditional Christian anti-Semitism which condemns the Jews to perpetual exile till they convert. The Palestinian war against Israel, strongly encouraged by many in Europe, came as a magnificent opportunity to continue and maintain the culture of hate and denigration against the Jews — now the State of Israel — and by lending a moral and political support to a second Holocaust. Europe has been the biggest supporter and subsidizer for the Palestinians, as well as their ideological teachers.’

Which is it? Is it the OIC imposing their caliphate on the ‘dhimmified’ Europeans for the past thirty-five years or is it the Europeans imposing their Christian anti-semitism on the Palestinians since Israel’s creation so that they can carry out a second Holocaust against Israelis? Either way, both the OIC and the Europeans with their combined resources have been miserable failures, after having had decades to complete this mission!

Putting things into perspective, one could view Bat Ye’or’s pathological hatred and attempt to explain it in psychological terms as being a reaction to her earlier life and expulsion from Egypt. Or one could compare it to the route Judea Pearl embraced after the murder of his son Daniel Pearl in Pakistan. Judea Pearl set up the ‘Daniel Pearl Foundation’ which he hopes will address the root causes of the tragedy. Since 2002 the organisation has held musical concerts around the world promoting the values of tolerance, integrity, and respect.

Feigning a concern for Europe’s supposed demise into ‘dhimmitude’, Ye’or’s real agenda becomes apparent. In her sanctimonious, holier than thou diatribes addressed to the ignorant, dhimmified, Jew hating Europeans, Bat Ye’or unwittingly shows herself to be the very antithesis of those same virtues she claims Europeans have abandoned.

Farha Khaled is a columnist for the Saudi based Arab News. She blogs at:
Twitter: http://twitter.com/farhakhaled

This opinion piece is by Farha Khaled, a freelance writer, and a columnist for the Saudi based Arab News. Opinions in this piece do not necessarily represent the opinions on the International Middle East Media Center.