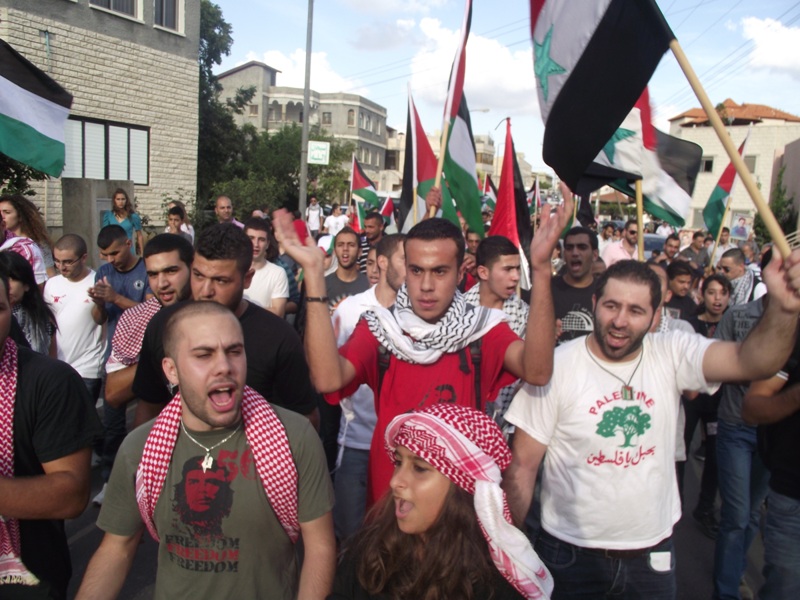 Responding to a decision by the Arab Higher follow-up committee in the 1948 territories, thousands of Arabs, Palestinians, participated in a ceremony commemorating the 11th anniversary of the Al Aqsa Intifada.The Intifada stated eleven years ago after the then-Israeli Prime Minister, Ariel Sharon, visited on September 28th 2000, the Al Aqsa Mosque in Jerusalem with his armed bodyguards, desecrated the holy site and showing disrespects to the beliefs of Arabs and Muslims in the country.

The Sakhnin protest started on Saturday evening when thousands of Arab citizens gathered in Sakhnin to participate in the regional massive protest to commemorate the Intifada and the death of 13 Arab residents of Israel who were shot and killed by the Israeli police eleven years ago.

Several political, social and religious leaders and figures participated in the commemoration and the massive protest denouncing the illegal Israeli policies and racism against the Arabs and Palestinians.

The protestors marched in the street and old alleys of Sakhnin heading to the main road and then to the square that was dedicated to the slain Palestinians who were killed on Land Day and when the Al Aqsa Intifada started eleven years ago.

Several officials, including Sakhnin Mayor, Mazin Ghanayim, and his deputy-mayor, Farouq Zbeidat, stated that “unity is an essential issue”, and that the Arabs and Palestinians in the 1948 territories will never accept to be marginalized or discriminated against, and that they will continue to defend the future of their children in order to enable them to live a dignified and decent life.

The Al Mezan Center for Human Rights reported that the scale of victimization and material damage has increased during the last nine years due to the Israeli army’s escalation of human rights violations in the occupied territories.

During these years, in the Gaza Strip alone the IOF has killed 4,661 Palestinians, 1060 of whom were children and 221 women.

The army has also destroyed 18,862 Palestinian houses, 5,687 of which were completely destroyed, and leveled 13,174 Dunams of agricultural land (one Dunam equals 1,000 square meters). The IOF has destroyed 990 public facilities, including schools and places of worship, 2,006 commercial facilities, 518 industrial establishments, and 1,221 vehicles.