Massive Protest Held In Hebron In Support Of Political Detainees 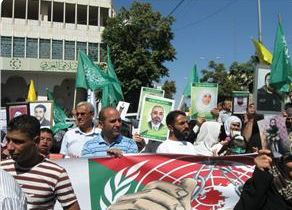 Thousands of Palestinians held a protest in the southern West Bank city of Hebron in solidarity with the political prisoners incarcerated by Israel in several prisons and detention camps, and called for their release.The protest was organized by different factions, youth groups, organizations, and the families of the detainees.

Participants carried Palestinian flags, flags of different factions, pictures of the detainees, and posters reflecting the hunger strike that detainees have undertaken because of ongoing abuse, medical negligence, and repeated attacks in the Israeli prisons and detention facilities.

The protesters also called for more solidarity actions to highlight the plight of the detainees and to expose the illegal Israeli measures against them.

The Palestinian Prisoners Society called on all residents to be actively involved in all efforts to support the detainees.

In an attempt to prevent the detainees’ hunger strike from spreading to all Israeli prisons and detention facilities, undercover forces of the Israeli Army broke into the Asqalan and Nafha prisons on Monday. Several detainees were injured.

On the same day, in an attempt to break the hunger strike, the administration at the Ofer Prison forced nine detainees into solitary confinement.