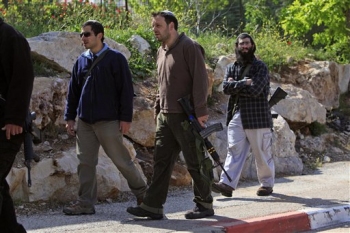 On Friday night, eve of the Jewish holiday Yom Kippur, a group of Israeli extremists broke into both an Islamic and a Christian cemetery in the city of Jaffa, damaging graves and writing anti-Arab and Muslim slogans on the walls of the mausoleums, the Palestine News & Information Agency (WAFA) reported.Palestinian residents of Jaffa who entered the cemetery for services on Saturday stated that the vandals had devastated their graveyard, and spray-painted slogans including ‘Death to Arabs’ and ‘Pricetag’ [a reference to a campaign by Israeli settlers to impose damage on Palestinian property in the West Bank] on the walls of tombs. They added that the group also broke into an orthodox Christian cemetery near al-Kazakhana, and destroyed some of the graves there.

Sheikh Ibrahim Sarsour, an official in charge of the Arab Unity movement in Jaffa, condemned the ongoing Israeli attacks against Islamic holy sites, a continuing problem with little follow-up or investigation by Israeli police. He added that the Israeli police have not yet caught any of the perpetrators of these crimes against the Arab and Muslim population of Jaffa.

He sent word to the Israeli Prime Minister, Binyamin Netanyahu; Israeli President, Shimon Peres; and Israeli Interior Security Minister, Ohronovic, stating that Palestinian Muslims have not yet recovered from the burning of the Al-Nour Mosque in the village of Toba Zanghriyya on October 4th. He claimed that the attack was supported, directly or indirectly, by Israeli officials. Certain Israeli officials have made public statements implicitly endorsing such attacks on the non-Jewish population of Israel.

Even Israeli Prime Minister Binyamin Netanyahu, in his recent address to the United Nations, expressed his respect for the Lubavitcher Rebbe, who have stated on multiple occasions that non-Jewish lives are worth less than Jewish lives, and have argued that the killing of a non-Jew by a Jew does not constitute murder.

Sheikh Sarsour observed that this support emboldened the extremists to attack the historic cemetery of al-Kazakhanah in Jaffa, and desecrate graves.

â€œI am not shocked that there has been another attack on a Muslim holy site, only a few days after the burning of a mosque. There is a trend [in Israel] towards a growing extremism, including harassment of and attacks against Muslims and Arabs,â€ said the Sheikh. â€œThe Israeli police and security forces are being negligent in failing to protect Palestinian citizens of Israel.â€

On Saturday, Israeli President Shimon Peres condemned the vandalism, calling it ‘a criminal act that dishonors us and is opposed to the ehtical values of Israeli society.’