Netanyahu, Deception, and His â€œJewish’ Demand 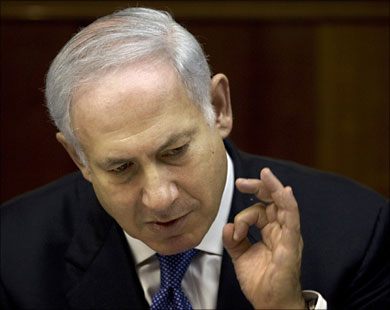 Why can’t the Palestinians recognize a ‘Jewish state’?I tend to believe things that a son says to his father in private. To this end, we should go back to 2009, to the words revealed by the father, Benzion Netanyahu, regarding the conduct of his son, Benjamin. With the consent of his son, the prime minister, the father gave an interview to Amit Segal on Channel 2 News, and this is what he said about the Bar-Ilan speech advocating the establishment of a Palestinian state: â€œHe [the prime minister] doesn’t support it.

The Palestine Liberation Organization recognized the State of Israel as part of the Oslo Accords in 1993. Recognition of a Jewish State is a new demand that did not come up during years of negotiations in the 1990s or in peace treaties reached with Egypt and Jordan.

But by trying to force the Palestinian Authority to recognize the state’s â€œJewishnessâ€, Israel is obliging the Palestinians to recognize a system in which Israel’s Arab citizens are second class. Those people, who represent 20% of Israel’s population, become the â€œnon-Jewishâ€; citizens of the â€œJewish stateâ€; â€“ a contradiction with serious implications.

Jewish entitlements over non-Jewish citizens would naturally follow. Israel would continue to allow the right of return for Jews from all over the world but not to Palestinians who lost or were stripped of their own homes and property. Nor would Israel’s own non-Jewish citizens naturally be entitled to seek family reunification inside the Jewish state, or any other such privileges afforded to Jews in a â€œJewishâ€ state.

By achieving such acceptance, Israel would not be forced to undermine its Jewish character by allowing the repatriation of Palestinian refugees back into Israel.

Most importantly, it is illegitimate for Palestinian sovereignty to be contingent on this recognition and it is morally repugnant that the Palestinians must negotiate their freedom in this way. It is comparable to the Belfast agreement having been contingent on the IRA recognizing Northern Ireland as a â€œProtestantâ€ entity.[2]

The first usage of the term â€œJewish stateâ€ was by Theodor Herzl who in late 1895 wrote Der Judenstaat (The Jewish State) giving birth to the modern Zionist movement.

There was no reference to a Jewish state by the Zionist Organization founded by Herzl, who preferred at first to use the description â€œJewish homelandâ€; or similar terms. In 1946, the Anglo-American Committee of Inquiry, also known as the Grady-Morrison Committee, noted that the demand for a Jewish State went beyond the obligations of either the Balfour Declaration or the Mandate, and had been expressly disowned by the Chairman of the Jewish Agency as recently as 1932.[3]

Despite Israeli claims to the contrary, this is in fact a relatively recent demand. Israel never demanded this recognition during peace negotiations in the 1990s or early 2000s. It was not raised in previous rounds of negotiations either with the Palestinians or with any other Arab party.

It was not part of the Taba agreements mediated by the Clinton administration or the ‘road map’ for peace brokered by the Bush administration. The Israelis first introduced the demand in 2007.[6]

The Palestinians cannot accede to this demand on two basic grounds: first, because defining Israel as a Jewish state prejudices the political and civic rights of Israelâ€™s Arab citizens, who comprise 20 percent of the population and whose second-class status would be consolidated by recognition of the â€œJewishnessâ€ of the state, and second, because to acknowledge Israel as the homeland of the Jewish people would compromise the Palestinian refugeesâ€™ right of return, as there would be no moral or political grounds for them to return to a universally recognized Jewish state.

This is not a moot or exaggerated point. It touches on the very core of the conflict and its genesis. Indeed, it is the heart of the Zionist claim to Palestine: Palestine belongs to the Jews and their right to the land is antecedent and superior to that of the Arabs.

This is what Zionism is all about, and what justifies both the Jewish return to the land and the dispossession of its Arab inhabitants.

First, and perhaps most importantly, if Israel is the homeland of the Jewish people, then the lands that it occupies today (and perhaps more, for there are as yet no borders to this â€œhomelandâ€) belong to this people by way of right.

And if these lands rightfully comprise the Jewish homeland, then the Arab presence there becomes historically aberrant and contingent; the Palestinians effectively become historic interlopers and trespassersâ€”a transient presence on someone elseâ€™s national soil.

The demand for the Palestinians to recognize Israel as the homeland of the Jewish people has yet another dimension. It places the moral burden of the conflict on the Palestinians, and consequently, not only exonerates Israel from the dubious moral circumstances of its birth but makes the Palestinians the historical transgressors.

Indeed, by refusing to accept the Jewish claim to the land, we are to blame for what has befallen us: had we accepted Israelâ€™s claim during the Mandate years, the entire conflict could have been averted; we should simply have handed the land â€œbackâ€ to its rightful owners from the time that they began to articulate, at the dawn of the twentieth century, their interest in it as an actualâ€”rather than spiritualâ€”homeland.

From this perspective, it is Arab rejection that caused the conflict and not the Zionist transgression against Arab land and rights.

This is of course precisely why this Israeli government and its most ardent Zionist supporters want to wrest this recognition from the Palestinians, as it would absolve Israel of its â€œoriginal sinâ€ and delegitimize the Palestiniansâ€™ version of their own history.

Taking this reasoning to its logical (if extreme) conclusion, recognition would give Israel the right to demand a measure of retributive justice. If the Palestinians caused the conflict, they should pay for their â€œsinsâ€: the Palestinian refugees should not be compensated for their dispossession, and the Palestinian people as a whole should lose any claim to equality or equivalence in any political settlement premised on supposedly painful or generous Israeli concessions.

And there is more. Israelâ€™s Arab population is of the same provenance and root as the rest of the Palestinian Arabsâ€”their right to be where they are is no less than that of the residents of the West Bank or Gaza, no less than the right of Palestinians anywhere to claim the land of Palestine/Israel as their patrimony.

By accepting the definition of Israel as the homeland of the Jewish people (indeed, â€œin any way it wishes,â€ according to the official PLO position), the â€œoutsideâ€ Palestinians (in the occupied territories and the diaspora) would effectively be undermining the Israeli Arabsâ€™ claim to belong to this same homeland.

The land of Palestine/Israel would thus no longer be their home, and their right to be there would no longer have any historical or moral validity: Israelâ€™s self-definition accepted, on what basis would they continue to reside in someone elseâ€™s homeland, and what grounds would they have to demand equal political and civic rights there to begin with?

The Palestinians (as represented by the PLO) have already formally recognized both the reality of the State of Israel and â€œits right to live in peace and security,â€ per the 9 September 1993 letter from PLO chairman Yasir Arafat to Israeli prime minister Yitzhak Rabin.

The recognition was doubly reinforced by the two subsequent amendments of the PLO charter, in 1996 and in 1999 (the latter at the demand of then prime minister Netanyahu himself).

In any future peace treaty, the Palestinians may reasonably be further asked to accept the agreed borders as final and inviolable, to commit to a resolution of all outstanding problems by peaceful means, to prevent their territory from being used for hostile acts against Israel, to respect the holy sites of all faiths, and to undertake that a comprehensive settlement of all the core issues will represent a final end to the conflict.

Right of return? After 1,850 years? Coming back 1,850 years later and using force to dispossess a people? Building an enclosure filled with 1.5 million men, women and children? A letter written by a British politician named Balfour to a wealthy banker in 1917 does not make this admissible. Right-wing Israelis keep telling us they have ethical clothes on, but they stand before us naked.

Netanyahu says that Israel would like to be the first to recognize Palestine. His wish will be granted very soon, as Israel weeps in grief and guilt before the world and asks for forgiveness.

** Samuel Dowell is a writer based in the U.S. who works to share information about the Middle East not available in the U.S. media.

**This opinion piece was submitted to the IMEMC by its author. Opinions in this piece do not necessarily represent the opinions on the International Middle East Media Center.