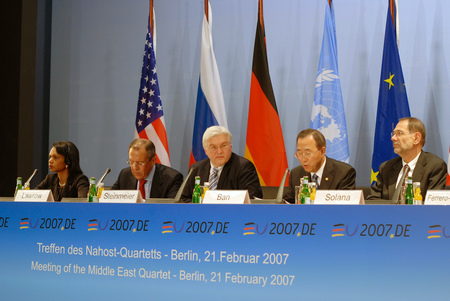 Members of the Middle East Quartet are set to invite representatives from Palestine and Israel to a round of talks, to begin negotiations afresh after talks stalled once again last September, due to Netanyahuâ€™s inability to halt the expansion of the settlements.The Quartet- consisting of envoys from the European Union, the United States, Russia and the United Nations- met in Brussels on Sunday to discuss a strategy to revitalize the fledgling peace process.

â€œTodayâ€™s meeting showed the Quartetâ€™s commitment to the timetable for talks set out in our September statement,â€ claimed Tony Blair, a representative on the Quartet. He added, â€œWe look forward to meeting with the parties shortly.â€ He refers to the statement of September 23rd, whereby they somewhat optimistically claimed a peace deal would be reached by the end of 2012.

Tempers have flared in recent weeks, due to the announcement of greater settlement expansion beyond the Green Line, and the Palestinians bid for full UN membership. However the mood within the Quartet remains hopeful, with EU Foreign Policy Chief Catherine Ashton stating, â€œI believe we have made good progress and will keep in close contact with Quartet partners and colleagues in the region with a view to meet and move things forward.â€

Whilst Israel officially claims that they welcome the Quartet, a statement from the PA insisted that Israel cannot â€œpretend to accept its initiative, while flagrantly breaching its termsâ€. This is of course referring to the recently approved plans to expand the East Jerusalem settlements of Gilo and Pisgat Zeev.