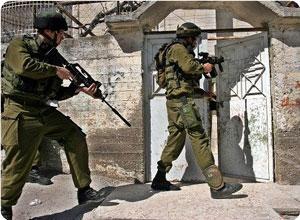 On Tuesday morning, the Israeli army arrested a Palestinian university student, took two youth for interrogation, and invaded several villages in the southern part of the West Bank city of Jenin, Palestine news & info agency (WAFA) reported.Security sources reported that the army took the student, â€˜Ala Mohammad Qalawleh, 27, who studies at the American University in Jenin, after invading al-Jadida village and breaking into his house, causing damage to his furniture.

The same sources also added that the Israeli Army invaded the village of Beâ€™er al-Basha, deploying several military units within the vicinity of a local school in the village.

They broke into the houses of Ameer Ghawadreh and Raâ€™fat Ghawadreh, aged 22 and 24 respectively, and took them for interrogation in Salem military base; they were soon released without charge.

The army did not stop there, and deployed in the villages of Jalqamoos and al-Mogheer, in the eastern part of Jenin. Soldiers took up positions in the streets and neighborhoods; no detentions were reported.

In addition, the army erected a military checkpoint at the entrance of â€˜Aaranah village, whereby they stopped and searched the Palestiniansâ€™ vehicles, and checked their identity cards.