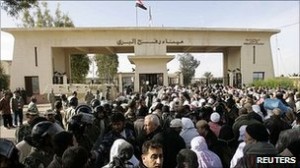 Hamas has announced plans to make foreigners wishing to visit the Gaza Strip apply for a visa at least one week in advance. Those wishing to stay more than one week will need to register the request with the Interior Ministry.Until now, activists and visitors could visit Gaza (if indeed the border crossing was open) and simply fill out a form in the security office. Now, however, those wishing to enter will need to register online or arrange a local sponsor.

In the past, several internationals have been kidnapped, and some even killed, by splinter groups at loggerheads with Hamas who are attempting to assert their independence.

One such example of this problem is the Italian activist Vittorio Arrigoni, who was found dead only hours after being taken by the Salafist group last July. The Salafists consider Hamas too moderate.

Haaretz asserts that the move will make life more difficult for some international organizations and charities working in Gaza. Many groups are barred from official contact with Hamas, due to its being labeled a terrorist organization by the European Union, United States, and numerous other countries.

Hamas claims the move will improve security for those internationals visiting the coastal strip and will enable Hamas to keep closer track of who is in the country. This will lead to greater protection for visitors and facilitate the work of the local security services.

On the Hamas website, the rules indicate that this will apply to foreign visitors, aid workers and activists. A separate set of regulations are currently being developed that will apply to international journalists.