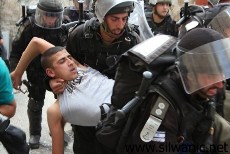 Palestinian sources reported Monday that clashes broke out in Ras Al Amoud in occupied East Jerusalem between Palestinian residents and Israeli soldiers and policemen, following repeated provocations by the army and Israeli settlers living illegally in the area.On Monday morning, Israeli soldiers and policemen headed to the Protest Tent in Silwan, where the residents and their supporters have been protesting seizures and demolitions of Palestinian homes by Israeli forces and settler.

The policemen then started provocative actions against the residents. Delegates of the European Union were visiting the Protest Tent when the attack took place.

Soldiers prevented reporters from filming the incident and threatened to beat up the cameraman of the Wadi Hilweh Information Center in Silwan (silwanic.net).

Soldiers also closed a road leading to an illegal outpost occupied by the Elad Settlers Organization, in Wadi Hilweh.

Later in the day, clashes erupted once again in Ras Al Amoud and Silwan.

Israeli settlers, illegally living in the area, continually perpetrate provocative actions and attacks against the residents.