Quartet Plans To Coordinate Meeting Between Abbas And Netanyahu 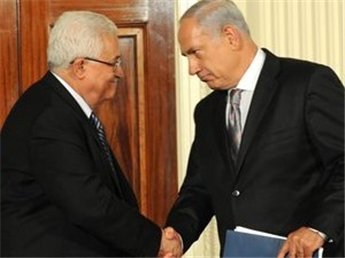 The International Quartet Committee is trying to set up a meeting between Palestinian President, Mahmoud Abbas, and Israeli Prime Minister, Benjamin Netanyahu, before the end of October, in accordance with the timetable established in its announcement on September 23 regarding the resumption of the stalled peace talks, the Maan News Agency reported.According to Maariv Israeli online daily, the Quartet is exerting utmost efforts to ensure the resumption of direct negotiations.

The Palestinian position, which calls for complete cessation of settlement construction plus recognition of the Palestinian state on the borders of 1967, may be the reason why the invitation was not sent officially on Monday when representatives of the Quartet met in Brussels.

Maariv added that the foreign minister of the European Union, Catherine Ashton, phoned Palestinian President Abbas and Israeli Prime Minister Netanyahu yesterday, and asked Netanyahu to freeze settlement construction in order to provide a chance for the start of negotiations.

The Quartet will first invite Netanyahuâ€™s representative to meet with the chief Palestinian negotiator, Dr. Saeb Ereikat, before October 23. This meeting, which will be held in the presence of Quartet’s representatives, will discuss the reservations of both sides and seek ways to break the impasse.

If the meeting manages to overcome the obstacles delaying the resumption of negotiations, Abbas and Netanyahu will be officially invited to meet.

Member of the Central Committee of Fateh Movement of President Abbas, Nabil Shaath, stated that the Palestinian leadership will not return to negotiations unless there is a complete cessation of settlement construction, expansion and all Israeli violations.

Shaath added that the Quartet’s credibility is weakened due to the fact that of the Quartet members, the U.S. will advocate for Israel, while Russia will defend the Palestinian position.

â€œWe [The Palestinians] do not deal with members of the Quartet as if they were one body,â€ he further observed. â€œThe Quartet is not able to take action, and it says openly that Israel is the one that hinders the peace processâ€

Palestinian President Mahmoud Abbas stated that he met Robert Serry, the representative of UN Secretary-General Ban Ki-moon, and the ambassadors of the European Union, and told them that the Quartet has nothing to say at the meeting of the delegates in Brussels. It will maintain its credibility, he added, by condemning the Israeli settlements.

Furthermore, he stated: â€œThe Palestinian leadership will not falter … No one can hide our voice and logicâ€